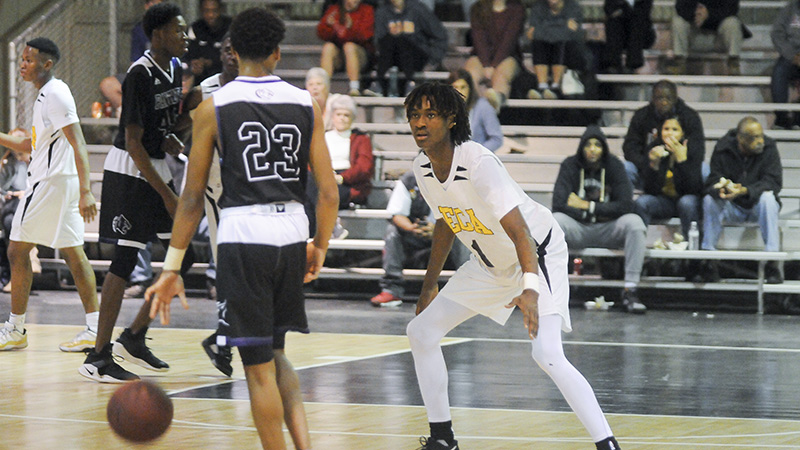 Ellwood Christian's Justin Bufford sets up on defense against Prattville Christian Academy in the 55-54 loss on Monday night.

The Eagles tied the game at 48 with 1:38 left in the fourth quarter, but missed free throws cost the Eagles the game in the 55-54 loss to PCA.

PCA got the season sweep against Ellwood, but each game was close.

“We’ve been battling with Prattville Christian all season,” Ellwood boys head coach Willie Shears said. “Tonight, they snuck out of here and beat us by one.”

Early on, PCA was controlling the game on both ends of the court. Shears had to use his first time out with 5:05 left in the first quarter because PCA started the game on an 11-1 run.

The timeout was the right call, because the Eagles were finally able to create some scoring opportunities for themselves. PCA was playing a stingy half-court trap that made it difficult for Ellwood to work the ball inside.

Ellwood’s Justin Bufford and Loveless Craig combined for 16 of the team’s 19 points in the first half. The only other Ellwood player to score in the first half was Malachi Washington, who hit a deep 3-pointer.

The Eagles trailed 27-19 at halftime.

After the half, Ellwood looked like a different team than the one that started the game. The shots started to fall, and the defense was able to force enough turnovers to slow down PCA.

Washington made two more 3-pointers. Bufford made one himself, and Ja’Mel Phillips finished a one-handed dunk in traffic to set the tone for the second half. 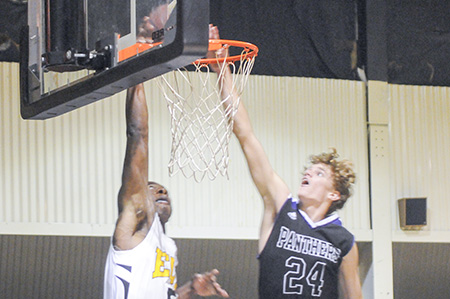 Those big plays got the Eagles back in the game. At the end of the third quarter, the score was 38-37 with PCA in the lead.

“In the third quarter, we fought back,” Shears said. “We had to take our time and really identify what was going on, so we had to switch a lot of things to contain the offense they were running at the time.”

Phillips started the fourth quarter off by converting an and-one play to give the Eagles its first lead of the game since the team’s first free throw attempt.

The two team’s battled back and forth. Trading buckets down to the final seconds of the game.

PCA forward Cooper Meadows was nearly unstoppable all night long. The 6-foot-4 junior was making 3-pointers, mid-range jumpers and finishing inside the paint. He finished the game with 22 points.

“[Meadows] is a super athlete,” Shears said. “He could do it all. He’s an all-around good kid.”

The Eagles scored 17 points in the fourth quarter, but it just wasn’t enough.

The team missed four free throws at the end that could have sealed the game for them. Craig made a buzzer beating 3-pointer, but it wasn’t going to be enough.

Craig led the team with 24-points, and Bufford had 14 points as well.

The battle between these two schools landed on the birthday of civil rights icon Martin Luther King Jr. Shears said it was a great opportunity for both of those schools to compete on the holiday.

“I think it’s a great showing for the community to see two teams such as Prattville Christian and Ellwood Christian play on today,” he said.

The Eagles are now 15-6 on the season. The team was scheduled to play area opponent Isabella on Tuesday night, but both schools will be closed. The game will be re-scheduled for a later date.

Prior to the boys’ game, the Ellwood girls team lost 56-15 to the PCA girls team.