Keith boys and girls basketball teams open 2018 with a win 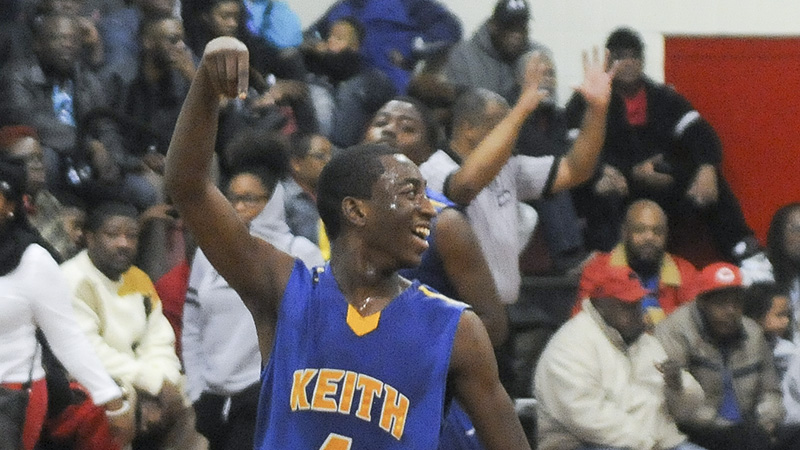 Keith guard Kendarius Perry celebrates a 3-pointer in the 66-46 road win at Southside.

The Keith High boys and girls basketball teams both won their first games of the new year in a road, rival matchup against Southside High School on Friday night.

The Lady Bears struggled early-on, but were able to pull off the 43-32 win over the Lady Panthers.

In fact, it was Southside who was in control for the majority of the game. The Lady Panthers outscored Keith 8-3 and 11-10 in the first two quarters respectively. It was a rough shooting night for both teams.

“We played horrible in the beginning,” Lady Bears head coach Cecil Williams said. “I’m just glad we won, because we started off horrible.”

Southside had a 19-13 lead at halftime. They made 6-of-11 free throws in the first half that helped when the shots stopped falling.

However, Keith’s leading scorers Shatavia Moore and Jakira Simmons were able to find ways to make enough baskets in the second half to mount a comeback. Moore finished the game with13 points, and Simmons had 10.

“We focused more with Shatavia,” Williams said. “Those two [Moore and Simmons] offensively kicked in for us. Team-wise, the defense played together to get the turnovers.”

The turning point of the game was Moore’s 3-pointer midway through the third quarter that tied the game. At the 4:27 mark, the Lady Bears took their first lead of the game up 25-24. The score was tied at 29 at the end of the third quarter, but the tide had already turned.

“I think that just came from more conditioning,” Williams said. “We just wore them down. Our conditioning just kicked in at the end.”

The Lady Panthers got into foul trouble early in the game, and eventually ran out of gas towards the end. In the second half, they were outscored 15-10 and 14-3 in the third and fourth quarters.

“The girls played really hard,” Lady Panthers head coach Rand Smith said. “They really stuck together, but we just ran out of gas there at the end.”

The Keith boys team, on the other hand, showed no signs of rust and was able to defeat Southside 66-46.

The Bears had a 12-10 lead at the end of the first quarter, and never trailed again for the rest of the game.

Southside forward Keshawn Arrington led his team with 15 points and seven rebounds, and he was the only Panther player to score in double digits. The shots simply weren’t falling.

“They came out flat,” Southside head coach Lenord Jones said. “Keith killed us on the glass. They controlled the glass all night long.”

Meanwhile, the Bears had two players score in double-figures. Arayvion Jones led the team with 17 points and Kendarius Perry had 10.

Even though he only put six points on the stat sheet tonight, Reeves was very impressed with the performance he got from Ky’Woine Thomas.

“My hat is off to Ky’Woine Thomas tonight,” Reeves said. “He stepped up big for us tonight in the absence of one of our players. He was a monster on the boards.”

The Bears were able to work both in the paint and beyond the arc. The Bears made six 3-pointers in the game, three of which by Tyre Webster alone. The team had a 42-35 lead going into the fourth quarter, and put up 24 more points as they pulled away from the Panthers.

“It was a big win for us because it’s a rivalry game,” Reeves said. “It helps build for the next game tomorrow, which is an area game against Aliceville at home.”