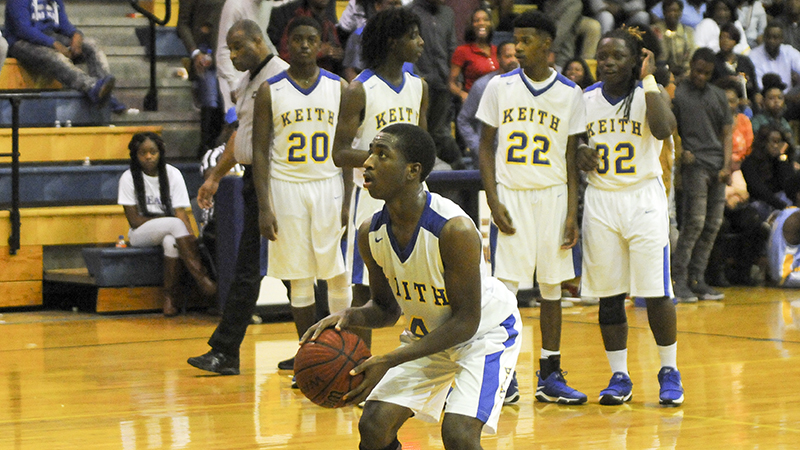 Keith guard Kendarius Perry readies a free throw after a technical foul against Selma in the Bears 73-58 win Friday night. The Bears had 48 free throw attempts in the game compared to Selma’s 28 attempts.

The Keith High School Bears earned a hard-fought 73-58 win over the Selma High Saints on Friday night in Orrville.

Not only was it a big win against a local rival school, but the Bears had more than just the game on their minds.

There wasn’t an empty seat in the gym, and more spectators filled any standing room they could find. But what couldn’t be missed, were all the Keith supporters donning their white “Jay Day” T-shirts in memory of Jaequan Simmons.

Simmons was 19-years old when he was shot and killed on December 16, 2016. The memory of the former standout basketball player for the Bears is still fresh on the minds of the Keith community.

“Jae was a big part of our program,” Bears head coach Clifton Reeves said. “We had him from middle school all the way throughout his career, so it was a very emotional day.”

Simmons’ mother Pamela attended the game and sat four rows up behind the Keith bench in her “Jay Day” T-shirt. Her son JaQuarius Simmons plays for the school’s B-team, and she still comes to the varsity games to support the team. 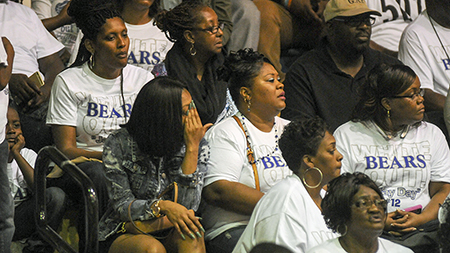 “It means a lot to me,” Pamela said. “Right now, my heart is very heavy and I just appreciate what the coach, the Keith High School staff, the principle and all of my friends and family have done. It’s just important to me that they showed up, and would want to do something like this for my son.”

Nearly a year after her son’s unsolved murder, Pamela was overwhelmed by the support that the Keith community showed.

“I just thank God that they still have his name out there,” she said. “I’m very proud of Keith High School, my family and everybody that honored Jae tonight.”

In honor of “Jay Day”, the Bears had to comeback from a rough first quarter to finally get in the rhythm of the game. The Saints were scoring quickly and with 2:12 left in the first quarter, the Bears were already down 16-2.

“We started off the game terribly,” Reeves said. “I think the emotions of the game got to us, because this is a big-time rivalry.”

Reeves was able to make an adjustment in the second quarter that turned the game around. After a few quick points to start the second quarter, the Saints struggled to keep control of the ball and maintain their scoring pace. The Bears were finally able to get their first lead of the game when Kendarius Perry made a three-pointer to make the score 23-20. The teams traded threes on the next two scoring possessions, but Selma was able to go into halftime with just a 28-26.

Perry led the Bears with 20 points in the game, and Arayvion Jones scored 17. The Saints were led by Romerit Nixon and Jadarius Whitlock with 12 and 11 points respectively.

“I think Keith played an excellent game,” Saints head coach Ronald Lane said. “I think they were well-prepared. We looked like we were right where we needed to be in the first quarter, but I think he made an adjustment with a trap out of the zone he was running, and we didn’t make a good adjustment to it.”

The Bears continued to chip away at Selma’s lead, and eventually took over the lead for good with 2:25 left in the third quarter. The Bears were up 47-44 to start the fourth quarter and Selma got in foul trouble early.

“We got back into it on the defensive end,” Reeves said. “We were able to make a few stops, get them in foul trouble and make some free throws to close the gap.”

Keith was able to break Selma’s press and turn contested shots into free-throw attempts. The Bears didn’t make as many free throws as Reeves would’ve liked, but they were able to make enough to begin stretching their lead.

The Bears had an eight-point lead with 40 seconds left. The Saints were still within reach until Lane and guard Christopher Carter got charged with technical fouls on back-to-back possessions that turned into five made free-throws by Jones. The Bears made two more free-throws after that and ran out the clock on their next possession.

“Overall, I’m happy with the win,” Reeves said. “But to get to where we’re trying to get to, we got to do better.”