Bufford and Craig lead the way in rematch versus. R.C. Hatch 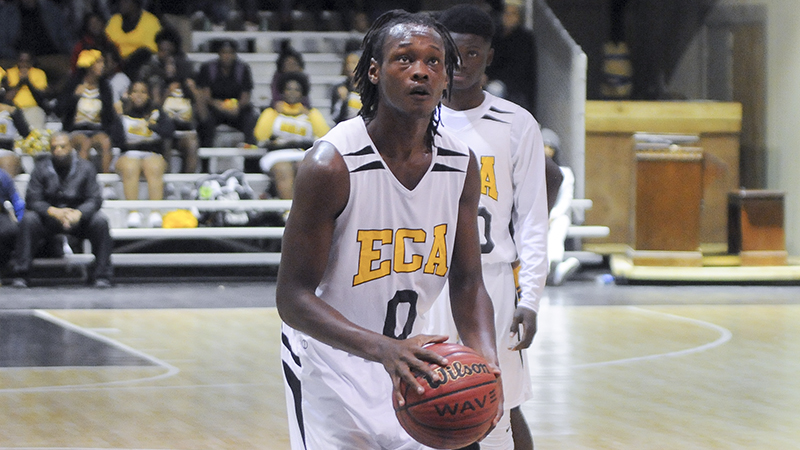 Loveless Craig takes a deep breath before making a free throw in the 50-37 win over R.C. Hatch on Tuesday night. Craig scored 13 points and collected nine rebounds in the game.

In the early season rematch between the Ellwood Christian Eagles and R.C. Hatch High School, the Eagles managed to pull off the 50-37 win at home on Tuesday night.

The second meeting between the two teams wasn’t as high-scoring as the 66-64 game Ellwood won on Nov. 21. The defense in the game was much tighter, and the Eagles were able to use their home court advantage.

“The first game we had to go into R.C. Hatch’s arena and play on their turf, and it’s very hard to beat them on their turf,” Eagles head coach Willie Shears said. “What we had to do was try to control the tempo on our turf, and not let Hatch take control of the tempo and dominate the game.”

It was half-way through the first quarter when R.C. Hatch scored the first two-points of the game, but the Eagles answered back with a quick seven point run which was kicked off by a two-handed fast break dunk by Loveless Craig.

“Loveless Craig is always going to bring energy to the game,” Shears said. “He had a couple of dunks here and there.”

Craig finished the game with 13 points and nine rebounds, while Justin Bufford led the team with 19 points and 14 rebounds.

The Bulldogs were unable to get within two-points of the Eagles after that initial run. The Eagles were able to work through R.C. Hatch’s zone defense and score enough points to maintain a safe lead.

“[Hatch] was packing in the zone trying to force us to shoot the jump shot, so we tried to run plays that would get our post people the ball in positions where they could be successful and score,” Shears said.

Before the half-time, Craig extended the lead to 23-15 with another two-handed dunk with .4 seconds left on the clock.

The second half mirrored the first, and the Eagles started the third quarter with a couple quick points and stifling defense. The Bulldogs were playing catchup, while the Eagles burned as much time as they could to find the easiest shot.

Early in the fourth quarter the Bulldogs got within five points, but defensive mistakes, turnovers and fouls allowed the Eagles to pull away again and ice the game with late free throws.

The Eagles are now 2-1 on the season. Their next game is Friday, Dec. 1 at home against A.L. Johnson.