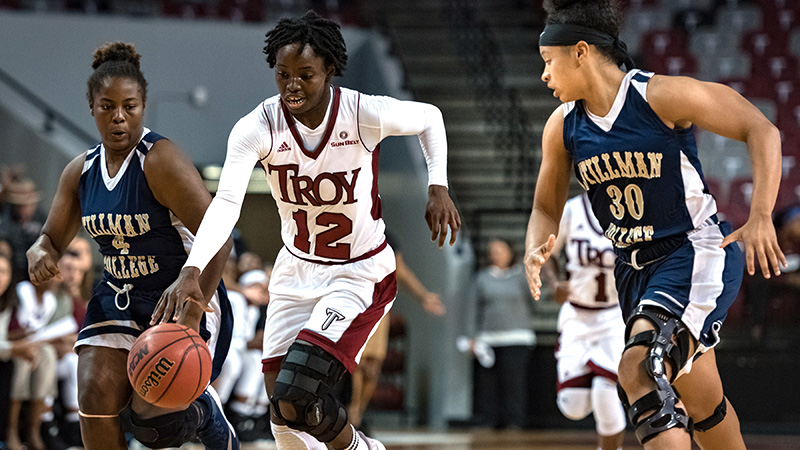 Confidence is all that Keith High School alumna Harriet Winchester ever needed to step up her game when she needs it. The 5-foot-11 sophomore guard at Troy University is taking advantage of her increase in playing time and it shows on her stat sheet.

Through the first three games of the season, Winchester is already leading the Sun Belt Conference in steals (10). She stole the ball six times in the season opener against Stillman College.

Her growth as a player can be tracked from back when Keith head coach Cecil Williams added a shy Winchester to his varsity roster when she was just in the seventh grade. She wasn’t quite ready yet, but he knew that she had potential.

“You could tell that she had the body frame and the mindset to do the work,” Williams said. “Plus, she had the skills, so it wasn’t that hard. The biggest thing was getting her used to playing varsity ball.”

It took her a few years to adjust, and Winchester still remembers being the timid seventh grader on the team.

“I was pretty scared and pretty timid, and I really didn’t want the ball,” she recalled. “But as my years progressed, I wanted the ball all the time.”

It was never a lack of talent that held Winchester back. Once she became comfortable playing at the varsity level, Winchester elevated to one of Keith’s best players. She was a 5-time Class 1A regional MVP, the 2015 AHSAA Class 1A Player of the Year, state champion in 2014 and finished her career as Keith’s all-time leading scorer.

“Every night she performed,” Williams said. “It wasn’t a night that she didn’t come in and give everything she had.”

Williams still follows his star player’s career at Troy University. He keeps up with her progression as an athlete, and continues to watch her game improve.

“Physically she’s gotten stronger and her skills have improved,” he said. “As an athlete, you’re supposed to grow in every area as you move on, and I see her developing well.”

Much like her seventh-grade year on varsity, Winchester entered her freshman season with a shy temperament as she wondered if she could handle playing at the Division I level. In her first year, she averaged just nine minutes per game and 3.1 points per game.

“It was my first year, and I wasn’t used to all the competition,” Winchester said.

After her first collegiate offseason, Winchester is ready for the competition and her increase in minutes shows the coaches at Troy University see it as well.

“My mentality is that I can play with my competition, so it has gotten a bit easier,” she said. “I’m just more aggressive on defense and offense.”

Troy’s next game is against Tennessee State on Monday, Nov. 27 in Nashville. Winchester is gaining confidence with each game, and she’s proud to be representing Keith High School at the next level.

“Every time I practice or play, I remind myself about who I’m doing it for,” she said. “Selma, Orrville and Safford are the places that raised me to be the basketball player that I am now, so that means a lot to me.”