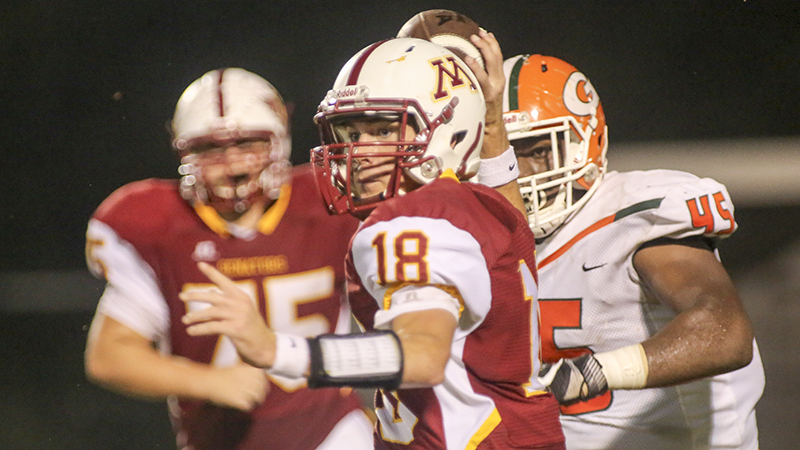 Morgan quarterback Peyton Egbert attempts to throw a pass with a Glenwood defender closing in. The Senators lost to the Gators during the regular season 31-21, and will face them again in the opening round of the 2017 AISA playoffs.

The Morgan Academy Senators (5-5) will go on the road to Smith’s Station to face the Glenwood School Gators (7-4) in the opening round of the AISA playoffs.

The two teams faced each other in Week 5 of the regular season, and the Gators won that game 31-21. The Gators had to come from behind to beat Morgan the first time. An 88-yard interception return for a touchdown late in the third quarter was the turning point in the game.

The first matchup was a mid-season non-area game, but the stakes in the re-match are much higher. The Senators haven’t made it to the playoffs since 2011 where they lost in the second round to the Glenwood School 62-42.

The Gators are averaging 34.6 points per game, and only allowing 13.9 to opponents. The 21-points Morgan scored against them earlier this season was the fourth highest their defense allowed all season.

The Senators have averaged 26.5 points per game on offense, while allowing 22.1 to opposing teams.

The Selma High Saints’ (4-5) final game of the year will be in Millbrook against the Stanhope Elmore Mustangs (4-5).

Even though the Saints didn’t make the playoffs this year, the team finished a lot stronger than they did in 2016 when they were 1-9.

Both Selma High and Stanhope Elmore allow close to 30 points per game on defense, but the Saints offense has been able to score more efficiently than the Mustangs have. The Saints average 27.4 points per game and scored more than 50 three times this season.

The Mustangs best performance so far only resulted in 28 points. The Saints also haven’t been shutout in 2017, unlike the Mustangs.

The only thing Stanhope has that Selma doesn’t is a spot in the playoffs.

The Dallas County Hornets (1-8) travel to Billingsley to face the Billingsley Bears (3-6) in the final game of the season.

The Hornets had made the playoffs in both 2015 and 2016, but were unable to make it a third consecutive year.

Dallas County has struggled offensively this season scoring just 12.8 points per game. The offense, which is primarily built around running back Calvin Starks and quarterback Octavious Palmer, is heavily dependent on the running game.

The Mustangs do have a defense that allows more than 35 points a game to opponents. They only held two opponents under 30 points to this point in the season.

The Bears have clinched a spot in the playoffs for the third year in a row. The game on Friday will be their last for the regular season.

Despite their 2017 record, the Lions do have a strong passing attack. Much like Keith, the Lions lost to Southside High School in overtime despite throwing four touchdown passes on the Panthers.

The Bears offense is predicated on their running attack through quarterback Jared Edwards and running backs Jeashan Black, Ty’Quarius Murray and Levi Thomas. The offense averages more than 30 points per game, and the defense allows less than 25.

Containing the Lions passing game will be the key to slowing down their offense.

The Southside High School Panthers (6-3) are playoff bound, but they still have one regular season game remaining against the Ellwood Christian Eagles (0-8) this Thursday.

The game will be the last game of the season in Selma, as all of the other local teams are on the road for their final games.

The Panthers are on a two-game winning streak where they have scored more than 50 points. The streak is likely to continue as the Eagles have allowed more than 50 points per game to opponents this season. In fact, they’ve only kept opposing teams under 50 in four games.

The Eagles are in a transitional period as the season comes to a close with interim head coach Gary Crum Sr. leading the team. Crum will finish the season as the team’s coach, and will be looking for a new head coach for the upcoming season.

Last season, Southside defeated Ellwood 60-0. The Panthers do have an opportunity to tie last season’s regular season record of 7-3.