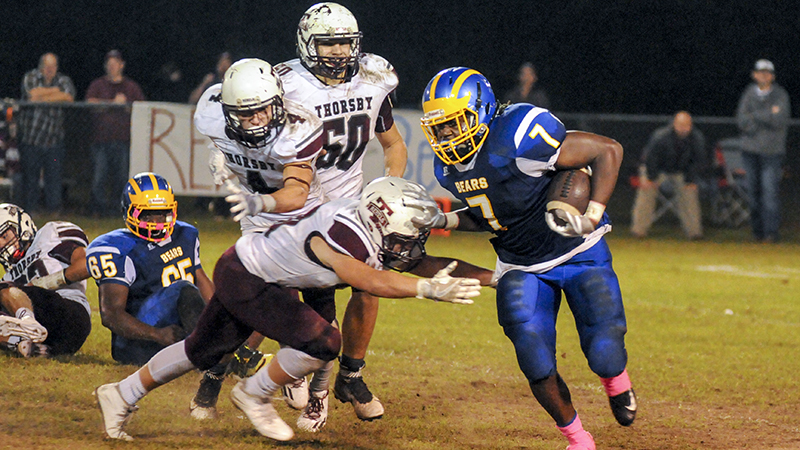 The Thorsby Rebels (7-1) crashed homecoming in Orrville Friday night with a 34-22 victory over the Keith Bears (5-4).

The Bears had a 12-point lead at half, but couldn’t overcome losing starting quarterback Jared Edwards to an injury on the opening kickoff.

“That just threw us in a disarray,” said Keith head coach Harry Crum. “He’s an integral part of our offense.”

Thorsby struck first with a touchdown reception from Cain Niece to put the Rebels up 6-0, but Keith answered back with a 2-yard touchdown run from Ty’Quarius Murray to go up 8-6.

The Rebels regained the lead with a 19-yard touchdown pass from Christian Fortner to Tucker Patterson. That score put Thorsby up 12-8 with 8:38 left in the second quarter.

A bobbling 35-yard catch by Keith’s Treshaud Jackson down the left sideline set the Bears up for its next score, and an offside penalty put them on the on the 1-yard line. Backup quarterback Mark Young scored on a QB sneak to take back the lead.

With just under a minute left to go in the half, Thorsby’s Fortner threw it to the wrong man. Keith defensive lineman Terrence Underwood leaped up and snagged an interception with one hand. The big guy rumbled down the field for an estimated 40-yard pick six.

That sent the Bears into the locker room with a 22-12 lead and a riled-up homecoming crowd.

Thorsby came back out firing on all cylinders. An 11-yard touchdown pass from Christian to Niece cut the lead to 22-18.

The Bears couldn’t get anything going and on their next drive and turned the ball over on downs near midfield. Thorsby capitalized, and Fortner scored on a 12-yard run to go up 26-22

An injured Edwards tried to rally the Bears back, but he was sacked on back to back plays. A fake punt came up short, giving Thorsby another short field.

Fortner connected with Niece again, this time from 15 yards out for another touchdown. That was all she wrote and put the Rebels up 34-22. The Bears couldn’t put together a comeback on homecoming night.

Crum said the loss was disappointing, but they are still in the playoff picture.