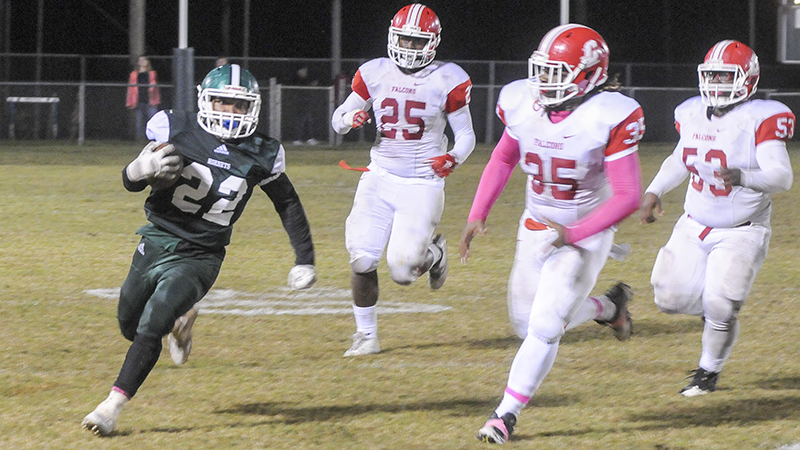 Dallas County running back Calvin Starks beats the Falcons defenders to the edge. Starks was responsible for all 16 of the Hornets points in the loss Friday night.

The Dallas County Hornets (1-8) lost their final region game 28-16 on senior night in Plantersville on Friday night to the Central Tuscaloosa Falcons (4-5).

The Hornets defense came up big in the first half of the game, but were unable to contain the Falcons offense much longer than that.

Dallas County stopped the Falcons on their opening possession deep in their own territory, and the Falcons missed the 21-yard field goal attempt. Before the first quarter ended, the Hornets recovered two fumbles. The first was recovered by LaDarius Furlow, but the Hornets were unable to turn it into points. The Falcons had the ball on the one-yard line on fourth down when their running back Javonta Leatherwood fumbled the ball again. That fumble was recovered by Andre Smith, and the Hornets were able to take advantage of the clutch turnover.

The Hornets offense was led by running back Calvin Starks who finished the game with 166 rushing yards, two touchdowns, a field goal, an extra-point and a fumble lost.

He scored his first touchdown on a three-yard run, and kicked a 15-yard field goal as the second quarter expired to give Dallas County a 10-0 lead.

Unfortunately, the Hornets lost control of the game after halftime and allowed the Falcons to run away with the game.

Central Tuscaloosa scored on four consecutive possessions. Falcons quarterback Aaron Hannible threw a 29-yard touchdown pass to cut the lead to 10-6. Then he threw a 22-yard touchdown to Jaden Thomas for his second passing touchdown of the game and a 14-10 lead.

Starks fumbled on Dallas County’s next possession, which set up a 32-yard touchdown run for Leatherwood and stretched the lead to 20-10.

All 20 of those points came in the third quarter.  Dallas County quarterback Octavious Palmer threw a deep interception on the ensuing drive. Falcons running back Thomas scored several plays later on a 21-yard run.

“They got us on the edge a little bit tonight, and we couldn’t capitalize when we got the ball back,” Matthews said.

Down 28-10, the Hornets kept trying to get back in the game, but they were running out of time.  Palmer injured his shoulder midway through the fourth quarter, and the Hornets were forced into a one-dimensional running attack. Starks began taking snaps from the wildcat formation, and eventually found the end zone again to cut the lead to 28-16 with just 1:55 left in the game.

Despite the promising start to the game and the high emotions of senior night, the Hornets were just unable to keep up the pace for a full four quarters.

“With it being senior night, they wanted to play hard for each other,” Matthews said. “We did that for one half, but we just didn’t finish the ball game.”

Dallas County’s final game of the season will be next Thursday on the road against Billingsley.

The Ellwood Christian Eagles (0-8) lost 70-0 on the road Friday night to the Isabella Mustangs (8-1). It was the Eagles first game without former head coach Mike Stokes this season. Gary Crum Sr. took over as the interim coach until the end of the season.

“We’re young, and we didn’t’ play all four quarters like I hoped we would,” he said.

The Eagles final game of the season will be on Thursday, Nov. 2 at Southside High School, according to Crum.

The Selma High Saints (4-5) lost 43-8 to the Hillcrest Tuscaloosa Patriots (7-2) on Friday night. The Saints final game of the season will be next Friday in Millbrook against the Stanhope Elmore Mustangs.