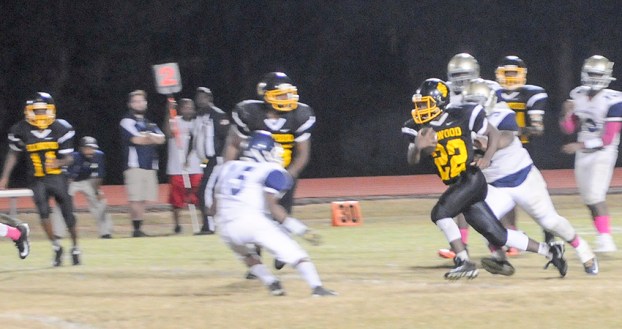 Ellwood running back breaks free on a big run in the 60-42 loss to Autaugaville Thursday night. This was the most points Ellwood has scored in a game sine 2014.

Ellwood Christian head coach Mike Stokes somberly, yet proudly wished his team good luck for the rest of their season and in the future after his final game ended in a 60-42 loss to Autaugaville.

Each player thanked him, hugged him or shook his hand after his post-game speech. He was the first head coach for the program when it began in 2009 and coached the team for five seasons (2009-12, 2016).

“That was the toughest part,” Stokes said. “I had to hold my tears in because we grew together, and that makes a big difference. They know what I expect and they know the hard work that we’ve put in, and they’re going to continue.”

The Ellwood Christian Eagles (0-7) jumped ahead early in their homecoming game, and jumped out to an early lead against the Autaugaville Eagles (1-6). The first half was chaotic and filled with mistakes, exciting plays and everything in between.

Ellwood’s first touchdown came on a fake punt play on fourth and 24. The Ellwood return man was nearing the first down marker when he fumbled the ball, but luckily his teammate was there to pick up the ball and run an extra 20 yards for the score. The successful two-point conversion gave Ellwood the 8-0 lead.

Autaugaville responded, but was unsuccessful on the two-point attempt and trailed 8-6 with 4:38 left in the first quarter.

Ellwood intercepted Autaugaville quarterback Keon Steele on their next possession, which setup another first quarter touchdown for the Eagles. The team’s running back broke out for a 67-yard touchdown run on a jet sweep to his left. The ensuing two-point conversion gave Ellwood a 16-6 lead. In just the first quarter Ellwood scored more points than they had in any previous game this season.

The second quarter is when the game started getting messy for both teams.

Ja’Mel Phillips recovered a fumble early in the quarter, and the team was able to capitalize on the next drive with a short touchdown run that made the score 22-6.

But on their next possession, Katavious Olds threw an interception to Steele. Now at quarterback, Steele ran in his own touchdown and two-point conversion to shrink the lead to 22-14.

Autaugaville tried a sneaky on-side kick, but it backfired and Ellwood ran the short kick back for a touchdown and a 28-14 lead with 15.9 seconds left before halftime.

The excitement from the easy score distracted Ellwood long enough for Autaugaville to complete a 64-yard touchdown pass from Steele to Ferontay Cutler with 1.9 seconds left in the half. 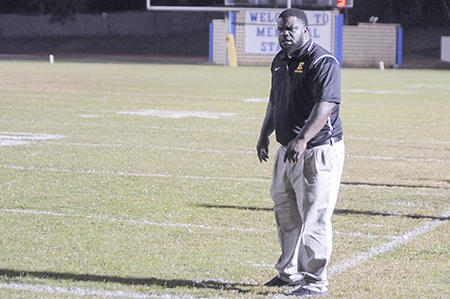 Unfortunately for Stokes and the Eagles, the homecoming miracle slipped away from the team after halftime.

Phillips broke the spell with a 65-yard touchdown run with 3:59 left in the third quarter.

The lead was ultimately insurmountable as Ellwood’s touchdown on fourth and goal from the four-yard line with 7:46 left in the game was the last one the team scored trailing 44-42.

The tired defense gave up two more touchdowns before the end of the game.

“We played a good football game,” Stokes said. “I’m proud of them. We’ve come a long way, and Autaugaville is not a bad football team.”

This was the highest scoring game Ellwood has been in all year. They hadn’t scored this much in a game since they defeated J.U. Blacksher 52-35 on Nov. 7, 2014, in the first round of the playoffs.

Stokes stepping down after Homecoming game

The Ellwood Christian Eagles (0-6) will host the Autaugaville Eagles (0-5) Thursday night at Memorial Stadium. Ellwood will be celebrating... read more