Demopolis proves too much for Dallas County in 59-6 win 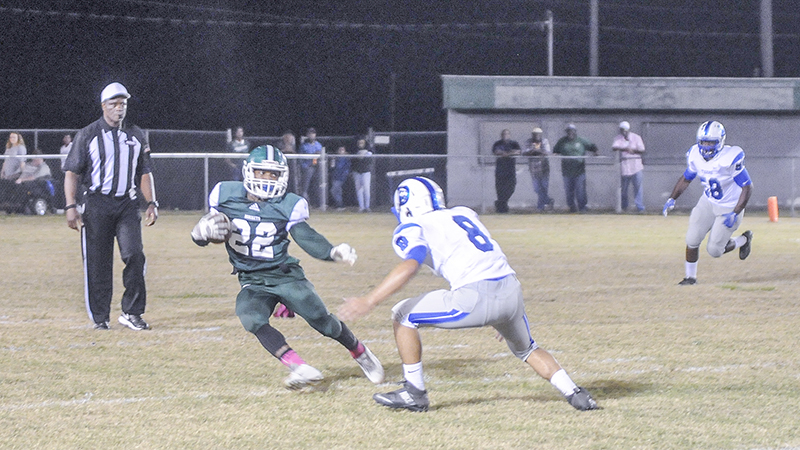 Dallas County running back Calvin Starks jukes a defender in Friday night’s 59-6 loss to Demopolis. Starks’ 80-yard touchdown in the first quarter was Dallas County’s only score of the game.

The Dallas County Hornets were simply outmatched in their 59-6 loss to the Demopolis Tigers on Friday night in Plantersville.

“It was a tough loss,” Dallas County head coach Cliff Matthews said. “We had a lot of people out. The young guys got a chance to play, but we just didn’t do as well as we expected.”

The Tigers were unstoppable on offense and suffocating on defense.

Demopolis’ other running back Antonio Besteder had three rushing touchdowns in the game, including a 79-yard score in the second quarter. Alexander Besteder and quarterback Rance Stevenson also scored on a short touchdown runs.

Quarterbacks Andrew Patterson connected with receiver Demetruis Davis for the only passing touchdown of the game.

The Hornets couldn’t get any movement on offense throughout the game. The 80-yard kickoff return touchdown by Calvin Starks early in the first quarter was best play of the night for Dallas County.

“That’s just average for him,” Matthews said. “[Starks] is going to come out here and play as hard as he can until the last whistle.”

They were down 30-6 at halftime, and there weren’t any adjustments to be made that could slow down the Tigers.

The second half was played on a running clock, and not much improved for Dallas County. Hornets quarterback Octavious Palmer was intercepted by Tigers defensive back Chance McVay on a ball that should have been caught to start the fourth quarter.

On Dallas County’s final possession, the second-string unit was in and they were making progress down the field as time winded down. The Hornets got down to the two-yard line with two seconds left on the clock, but were unable to get that first offensive touchdown before time expired.

Even though the Hornets didn’t win the ball game, they did make a statement that everyone at the game was able to see. The team placed pink athletic tape over their helmet stripe and wore a variety of pink game accessories in honor of Breast Cancer Awareness month.

The Hornets will have a road region game next week against Marbury High School in North Deatsville.

Demopolis will play at Sumter Central in a region game.