Southside gets win over county rival Keith in overtime 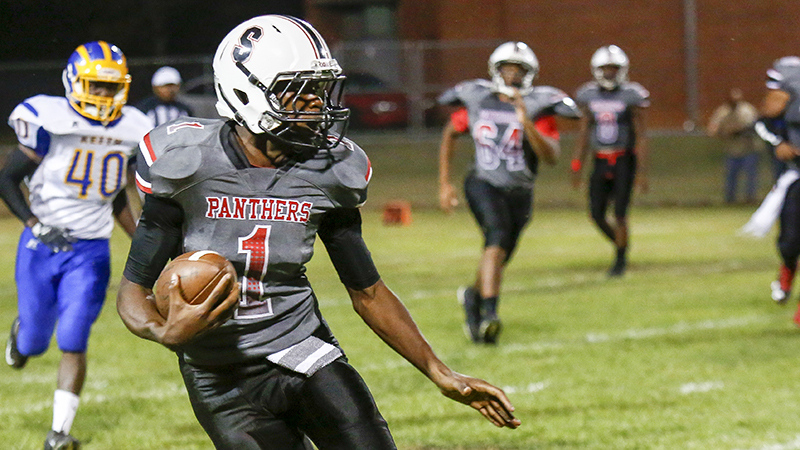 On fourth down with 21 yards to the goal line in overtime and down by eight, Keith High School quarterback Jared Edwards somehow got off a pass while surrounded by Southside defenders. His receiver Kendarius Perry leapt into double coverage and made the catch, but he landed on the two-yard line and the roller coaster rivalry game was won by the Southside High School Panthers. 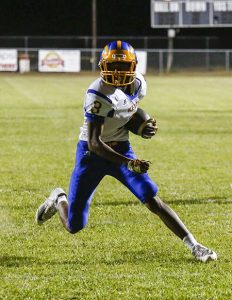 Trashaund Jackson had a touchdown reception and interception for Keith.

“We fought some adversity in this game,” Southside head coach Daniel Flowers said. “The kids played hard man. I told them before the game that it will come down to the people that want it the most. Our kids showed they wanted it the most.”

The excitement didn’t wait for the second half of the ball game as each team tried to take advantage of the other’s mistakes. The Panthers topped Keith on its opening drive, but Ladarius Harrison fumbled the punt and the Bears were able to recover it on the 10-yard line. Three plays later Edwards threw his first touchdown pass of the game to Mark Young to give the Bears a 6-0 lead.

Earlier in the week, Keith head coach Harry Crum emphasized that his team needed to limit Southside’s big plays. Unfortunately, that’s exactly what the Panthers leaned on all game. Before the first quarter ended, Panthers quarterback Gneil Johnson hit Derrick Griffin Jr. on an intermediate pass that Griffin turned into a 63-yard gain by weaving through defenders and breaking tackles.

Johnson tied the ball game 6-6 two plays into the second quarter with a short screen pass to running back Jaylin Colvin. On his next possession, Johnson was intercepted by Jeashan Black, who had a huge game on both sides of the ball.

Keith capitalized on the Panthers second turnover of the game, and Edwards threw a wide receiver screen that Trashaud Jackson turned into a 26-yard touchdown to take a 13-6 lead.

The Panthers answered back on the next drive when Griffen caught a pass from Johnson, shook off his defenders and sprinted to the end zone for his second touchdown of the game. Keyshawn Arrington ran a sweep to the left and dove for the pylon to get the two-point conversion and give the Panthers a 14-13 lead going into halftime.

The fun kept on rolling after an excellent halftime show, when Flowers called a half back pass play to start the third quarter. Malik Johnson completed the pass to Arrington for a 53-yard play.

Gneil recorded his third passing touchdown of the game on a 5-yard route to Davion Moore to extend the lead to 20-13.

The Bears didn’t back down and called a reverse to Jackson that went 55-yards for a touchdown on their next offensive play to cut the les to 20-19.  On the next drive, Black got loose again for a 65-yard touchdown run to take the lead 25-20. At that point, Keith seemingly had control for the rest of the game.

Southside turned the ball over twice on downs on their next two possessions and followed that up by throwing a pick-six to Black. On the ensuing kick-off, the Panthers fumbled the ball in their own territory and the Bears recovered it with 10:24 left in the fourth quarter and losing 32-20.

Apparently, that was the wake-up call the Panthers defense needed, because they blocked a punt on Keith’s next drive and the offense drove down the field to score. Gneil ran a sneak play from the one yard line to make the score 32-26.

The Bears slowly began to unravel and were unable to gather Southside’s onside kick.

The Panthers had nothing to lose at this point and on fourth and six from the 11-yard line. Malik threw a pass that was deflected by a Bears defender, but caught in the end zone by one of his teammates to tie the game with 2:39 left.

“I thought we were in a position to win at the beginning of the fourth quarter,” Crum said. “We made some key mistakes… That ultimately led to our demise. We did some things well, but we didn’t do well enough to win.”

In overtime, the Panthers scored first on a 20-yard run by Griffen and the Bears were unable to respond. The Southside fans and players celebrated their narrow and improbable comeback in an intense rivalry game.

“Our guys played ball, and they didn’t give up,” Flowers said.