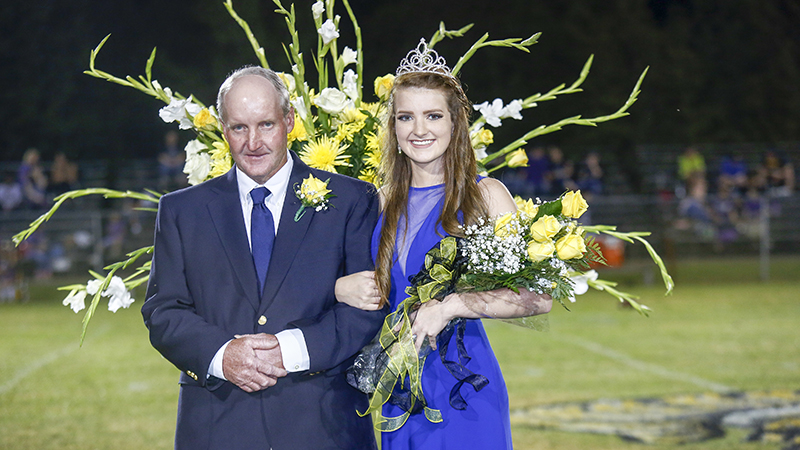 2017 Meadowview Homecoming queen Hannah Phillips poses for a photo with her father Glenn during halftime at Meadowview’s game against Lighthouse Homeschool Friday night.

Meadowview Christian School went into the locker room at halftime only down two points and with the momentum in their favor.

The Trojans opened up the second half of play receiving the ball from Lighthouse Homeschool, but couldn’t capitalize on good field position and stayed behind the Warriors the rest of the game and ended up with a 52-38 loss on homecoming.

“We tell the kids every time, any time there’s a game and it’s close, the battle is usually won in the first five minutes of the second half,” said Trojans coach Micheal Blair.

Meadowview (0-5) got down in the first quarter when Lighthouse (4-0) scored on a 23-yard run and a good two-point conversion to bring the score to 8-0.

On Meadowview’s next position, they fumbled the ball and turned it back over to Lighthouse who took advantage and scored on a 44-yard run. With the extra two-points, the Warriors were up 16-0.

Lighthouse would end up going up 24-0 before Meadowview got on the board. Jeremy Lee returned a kickoff for a touchdown and also scored the extra two to make the score 24-8 early in the second quarter.

Meadowview seemed to take control of the game, adding two more touchdowns, one from Lee and another when Austin Little picked off Lighthouse and returned it for six points. With one good two-point conversion, Meadowview was within two points at 24-22.

The third quarter was slower than the others. At the beginning of the fourth, the score was 32-22, but the Warriors would soon add on to the lead with another touchdown to make it 38-22.

Meadowview would then turn the ball over on a fumble and give Lighthouse great field position at the Trojan’s own 27-yard line. Lighthouse picked up another score to make it 44-22.

Just as it seemed like Meadowview would give up, Lee threw a 16-yard pass to Chambers McGilberry for a touchdown. With an added extra two-points, the score was 44-30. Lee would add a third score to close the gap to 44-38, and that’s as close as Meadowview would get.

Meadowview takes on Tuscaloosa Christian at home next Friday.