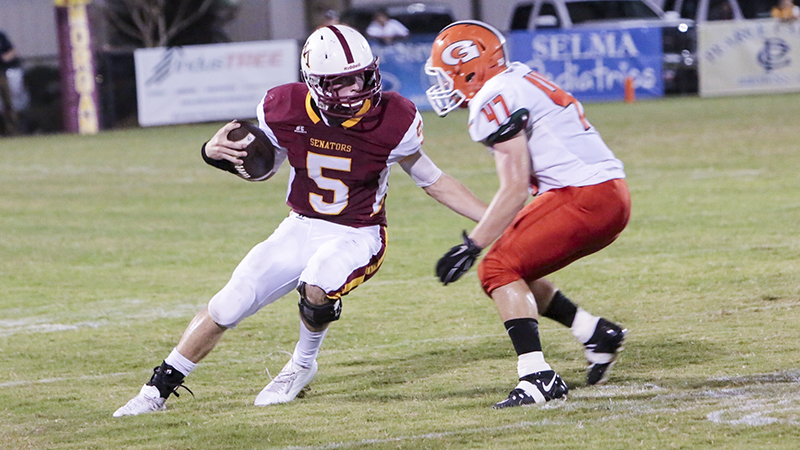 Morgan Academy dropped a thriller Friday night in Selma falling to the Glenwood Gators 31-21 in a roller coaster game.

The Senators stormed out of the gate scoring 14 points in the first quarter.

Peyton Egbert hit running back Sam Brackin down the middle of the field for a 48-yard touchdown pass to put Morgan up 7-0.

On Morgan’s next possession, Hardin Utsey capped a 56-yard drive with a 10-yard jet sweep and it was Senators 14, Gators 0 with 4:53 to go in the first quarter.

The Gators rallied to cut the lead to 14-10 at halftime. Thomas Camacho kicked a 25-yard field goal on the last play of the first quarter to start the comeback for Glenwood.

In the second quarter, Kayleem Bonds scored from seven yards to cut the Morgan lead to four.

The Gators kept rolling in the second half. Quarterback Bryce Valero connected with Cameron O’Neil, who made a juggling 15-yard catch and kept his feet inbounds at the pylon to put Glenwood up for good.

The big momentum changer for the Gators was an 88-yard interception return by Navy Harris with 3:52 to go in the third quarter. It put Glenwood up 24-14 and stopped a potential scoring drive by the Senators.

Morgan fought back. The Senators drove 74 yards to pay dirt by converting two fourth downs. Ed Williams found the end zone on an eight-yard sweep with 9:33 to go in the fourth quarter, to close the gap to 24-21.

Playing their third straight home game, the Senators could not close the deal. Valero scored on a quarterback sneak with 3:38 to go to give the Gators the 31-21 margin of victory.

Bonds led Glenwood with 126 yards rushing and Brackin had 77 for Morgan.

The Senators are now 2-3 on the season. Morgan faces more Gators in their next game on the road in Grove Hill against Clarke Prep.