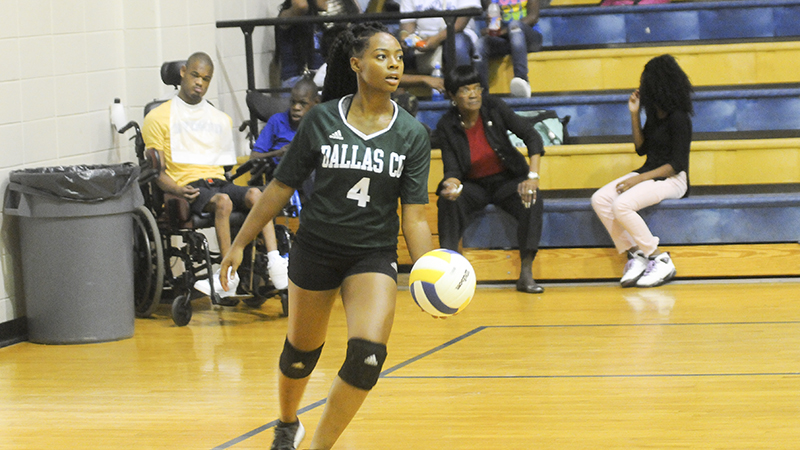 Keyondra Fletcher sets up her serve in Dallas County's victory over Keith High School on Tuesday.

Even though it was a 1 p.m. start, the game was well attended by Keith High School and middle school students.

The students got a break from class to watch their team in action.

The Hornets got off to a slow start in the first set losing the first seven points of the game to the Bears.

However, they were able to turn it around and go on multiple runs to win the first set 25-20.

“They relaxed and began to play together,” Dallas County head coach Linda Moore said. “I told them when I called a timeout to just play our ball. I told them to just pretend like we are in our gym practicing.”

Dallas County improved their defense in the second set, and prevented Keith from going on multiple runs.

The longest scoring streak the Bears were able to put together in the second set only lasted for three points.

Bears head coach Towanna Flennory was frustrated after the game by her team’s performance.

Even though she has a young team, the team still had too many service errors, poor communication and mental mistakes  that prevented them from playing well according to the coach.

“They’re playing nervous and we’re making a lot of unforced errors,” Flennory said. “As a team, we are just mentally weak… It’s not the talent.”

Abigail Smith served an ace for the Hornets on the final play to win the second set 25-11.

The Bears played better in the third set, but the pressure of being two games down already was insurmountable. The Bears and Hornets traded points back and forth throughout the whole match.

“We just started playing,” Flennory said. “We played terrible in the first two games. In the last game, we actually cleaned up some of those errors and we made it a good game.”

Keith finally got some separation late in the game, and were just one point away from forcing a fourth set.

According to Moore, setter Morgan Krumnow played a strong game for the Hornets.

She was a key contributor in setting up scoring opportunities for her teammates.

It was only fitting that she be the one to finish off the match.

“[Krumnow] is like the quarterback on the team,” Moore said. “She made sure the girls are where they’re supposed to be. She kept them motivated and mentally in the game.”

Krumnow served the final five points for the Hornets, including the ace that won the match.

The Bears will travel to R.C. Hatch High School for an area match on Wednesday at 5 p.m.

The next game for the Hornets will be on Wednesday at Selma High at 4:30 p.m.