Keith takes down Billingsley 42-36 in front of home crowd 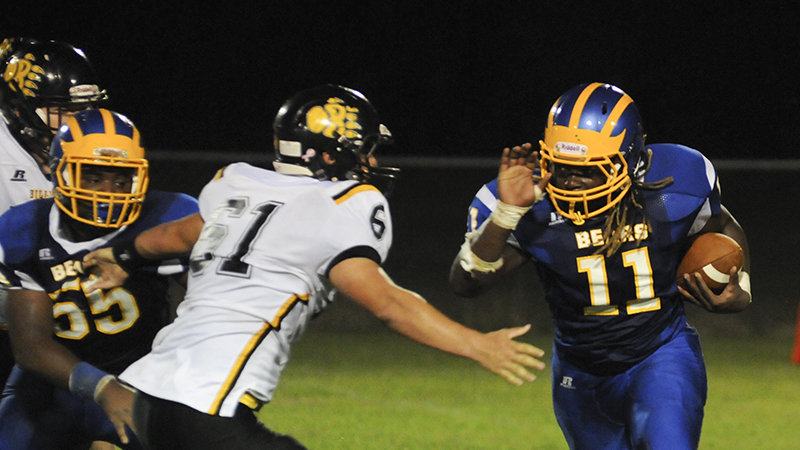 A late fourth-quarter stop from the Keith defense preserved a 42-36 victory Friday night over Billingsley at J.V. Caldwell Stadium.

Each time Keith looked to have the game in control, Billingsley battled back to stay in the game until the very end.

“I thank God we were able to come away with a win,” said Keith head coach Harry Crum. “Early on it looked like we were going to go up. I didn’t think it was going to be a track meet like this.”

Keith struck first in the battle between the bears with a 39-yard touchdown run from Levi Thomas, going up 6-0 after a failed two-point conversion.

The Bears on the opposite sideline answered back with a seven minute, 83-yard drive.

From 30 yards out, Billingsley quarterback Malik Callens rolled out to his right and found Raymond Butler all alone in the end zone, tying the game up at six points apiece.

It only took Keith 19 seconds to answer back.

With 2:01 left in the first quarter, Trashaud Jackson took the Billingsley kick off to the house for an 83-yard return for a touchdown.

Martavis Hatcher added the two-point conversion on an end-around, giving Keith a 14-6 lead.

Billingsley ate more time off the clock and cut the Keith lead to 14-12 with a nine-yard quarterback keeper from Callens with 7:35 left in the second quarter.

A 31-yard run from Keith’s Ty’Quarius Murray and a pass interference call on Billingsley put the Bears in scoring position again.

Quarterback Jared Edwards threw a short screen pass to Jackson, who fought his way into the end zone.

Billingsley was looking to cut into the lead before halftime, but an interception from Murray sent them to the locker room down 22-12.

Keith got the ball to start the first half and wasted no time to add to the lead.

Jeashan Black scored from 48 yards out putting the Bears up 30-12, but Billingsley fought back.

A kickoff return to the Keith 49-yard line gave Billingsley great field position for their first possession of the second half.

On a fourth down play on the four-yard line, Callens found Taylor Arington in the end zone on a quick slant for a touchdown, cutting the Keith lead to 30-20.

Keith had a big fourth down play of their own on the next drive.

With less than a yard to go, Edwards handed off to Murray, who busted up the middle for a 46-yard run down to the five-yard line.

One play later, Edwards kept it for himself for a five-yard touchdown, putting the Bears up 36-20.

Billingsley head coach Tyson McLean said his team refused to go down without a fight.

They answered right back with a 76-yard scoring drive early in the fourth quarter.

Callens found La’Darius Starks from 19 yards out for a touchdown, making it 36-28, Keith.

A big kickoff return for the Bears put them in prime position for another touchdown drive.

Billingsley answered back with an eight-yard run up the middle from Arington.

That score put them within one possession, 42-36.

Keith punted for the first time on the night with 3:10 to go in the fourth after the offense sputtered, but the defense came up big with a stop to save the win.

“I told them we needed a stop to win the game,” Crum said. “We pulled it off.”

Keith, now at .500 on the season, will play at Southside next.