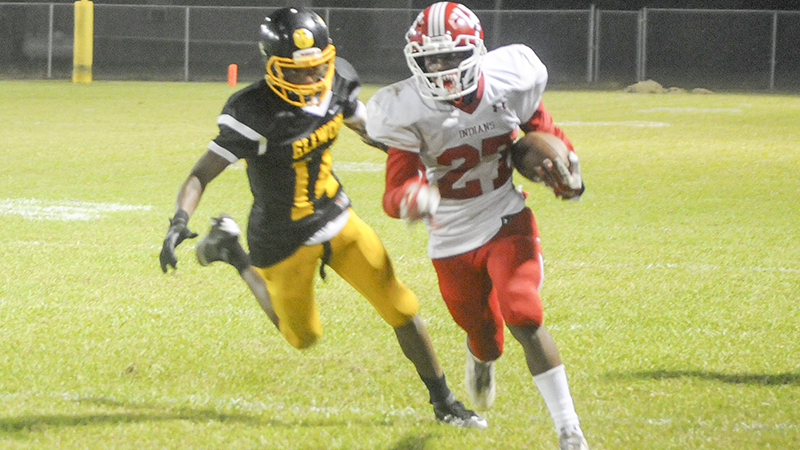 The Ellwood Christian Eagles fell behind Loachapoka early and were unable to catch up in Thursday night’s 44-0 loss. The Eagles have lost three games in a row to start the season.

The game had been rescheduled to Thursday night earlier in the week and subsequently relocated when Memorial Stadium was unavailable.

Luckily, the Keith middle school team had an away game Thursday night and Keith High School head coach Harry Crum was willing to accommodate Ellwood for the game.

“We actually had a lot of things going on ourselves here tonight,” Keith administrator Tommy Tisdale said. “But the field was open and it was a way for us to accommodate them. [Crum] agreed to stay out and help with whatever was needed.”

Crum had the field lined and ready for the game, and the Eagles had a place to play.

Unfortunately, the game didn’t go as Ellwood would have hoped.

The team struggled to run the ball or throw it against the Indians defense. Failed fourth down conversions, bad snaps and an interception were just a few of the miscues that impeded the Eagles ability to progress. Including a bad snap that was recovered by the Indians defense and returned for a 32-yard touchdown. The team was held without a first down until their fourth possession and they were already down 18-0.

“When you’re young and inexperienced, this is what’s going to happen,” Ellwood head coach Mike Stokes said. “Right now, we’ve got basketball players trying to play football and it’s telling. We just need to go back to practice and keep working. Trying to get better every week.”

The Eagles defense gave up five rushing touchdowns and a passing touchdown in the first half.

The Loachapoka High School marching band put on an impressive show during halftime before the teams came back out to play.

The referees applied the mercy rule, which shrunk the quarters down to two minutes each with a running clock. At that point, the Indians offense took a knee and clock management was ignored for the rest of the game.

After one play, the teams reversed fields for the fourth quarter. The Indians snapped the ball and the 22 players on the field stood and waited for the time to expire.

The Eagles are a young inexperienced team, according to Stokes. It also didn’t help that the team had at least five players out with injuries.

The lack of depth exposed the fatigue of the Ellwood players as the game went along.

The Eagles next game will be Friday, Sept. 22 on the road against Maplesville (2-0).