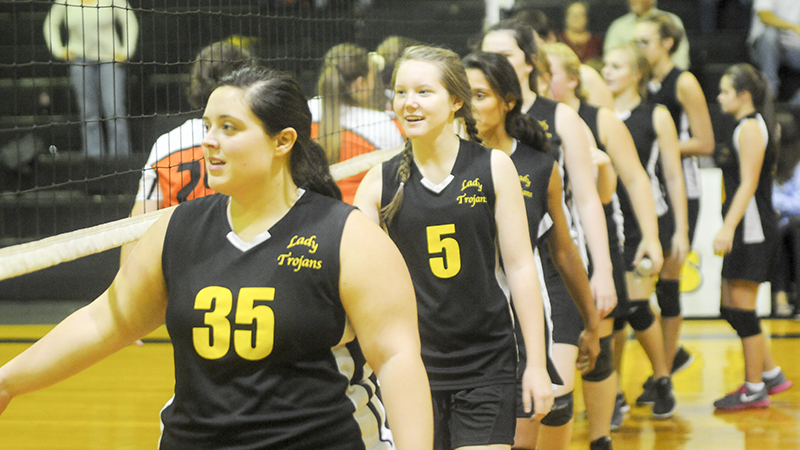 The Trojans have been playing well all year, with only two losses in the regular season to Tuscaloosa Christian and New Life.

Meadowview controlled the net each game with winning hits on spikes and well-located tips.

In the first set, the Trojans put together 5 separate streaks of three points or more to distance themselves from the Cougars. Verhoff and Erin McIntyre both had two aces and kills each in the first set.

Cahawba Christian put up a better fight in the second set but were unable to sustain any momentum. The Trojans had four aces in the 25-19 second set win.

In the third set, Meadowview went on a seven-point run early and never looked back. The team won the final set 25-12 and put another mark in the win column.

“Today, the girls played really good,” Burton said. “I was real impressed with their passing and setting. Their serving lacked a little bit from where I want it to be, but all-in-all I think we played a good all-around game.”

Defeating the Chargers was a big win since there are only four games remaining on the regular season schedule. That includes two re-matches against Tuscaloosa Christian and New Life.

In order to make it to the state playoffs, the Trojans have to be one of the top two teams in their area.

“We’ll probably have to play a sub-state game, but if you’re in the one or two spot then you’re going to play the lower seed,” Burton said. “Being one or two is real big for the sub-state.”

Both remaining area games for the Trojans will be on the road against Tuscaloosa Christian and Victory-Columbus.

“We’ve got two more area games. One is a team that has beat us, and the other we beat them,” Burton said. “I feel pretty good we’ll finish second in our area.”

The Trojans next game is a non-area game at home against Evangel Christian on Monday, Sept. 18.