Trojans fall in back and forth game 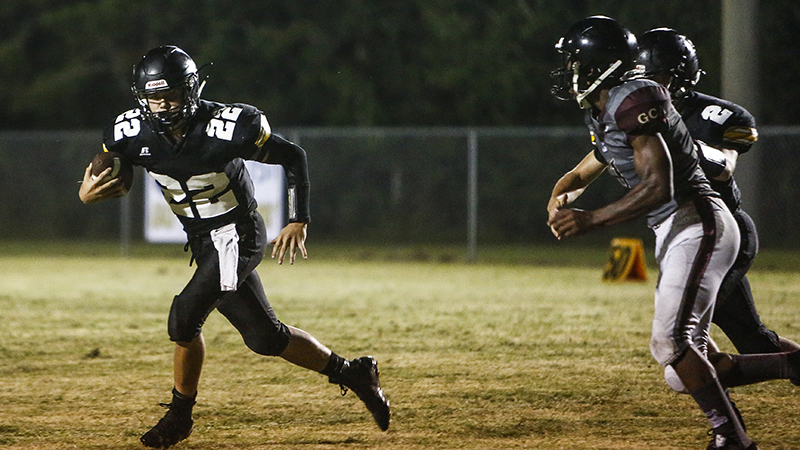 Jeremy Lee runs the ball in a back-and-forth game against Gunn.

Meadowview Christian School took on Gunn Christian Academy at home Friday night in the Trojans’ closest game of the season.

“We had an opportunity [to win]. We went into half time ahead, we make a great drive late in the game we get to the five [yard line], and we got two busted plays on the same series,” said Meadowview coach Micheal Blair. “We’ve just got to get more consistent with what we can do.”

The Bulldogs scored on the first play of the game and with the two-point conversion went ahead 8-0.

Meadowview’s Christopher Wilson answered for the Trojans with a 1-yard touchdown run. With the complete conversion, the home team tied the game at 8.

Gunn added on two more scores and brought the score up to 20-8 to round out the first quarter.

With exactly six minutes left in the first half, Meadowview’s Austin Little caught a 10-yard pass for a touchdown. Not too long after, he scored again with a 26-yard pass. After a good conversion on his first touchdown, the Trojans took the lead 22-20.

Only 16 seconds later, Gunn answered with a 46-yard touchdown pass and a successful two-point conversion to bring the visitors back up 28-22.

About one minute later, Meadowview reclaimed the lead with a 15-yard touchdown pass by Little. The Trojans went in to the half up 30-28.

Gunn came out in the second half strong looking to take back the lead. The Bulldogs scored on a 70-yard run and a two-point conversion to put them back up 36-30.

From then on, Gunn took the lead and Meadowview was fighting to tie it up.

Meadowview’s Jeremy Lee scored on a 28-yard run to bring them up to 36 all, but Gunn answered to go ahead 44-36. The Trojans final score came from Wilson with a two-yard run and tied the game at 44.

Meadowview drove the ball inside the Bulldogs 5-yard-line with less than a minute left on the clock but couldn’t capitalize on a play and turned the ball over on downs.

After two big losses before Friday’s game, Blair said it’s hard for his guys to lose such a close game, but he feels like being  close will give his team some confidence.

“It’s hard when you lose a close one like this when you’ve been beat bad twice, to come back and practice hard,” Blair said. “We’re close, we’re just not there yet.”