Dallas County looking for first win on the road 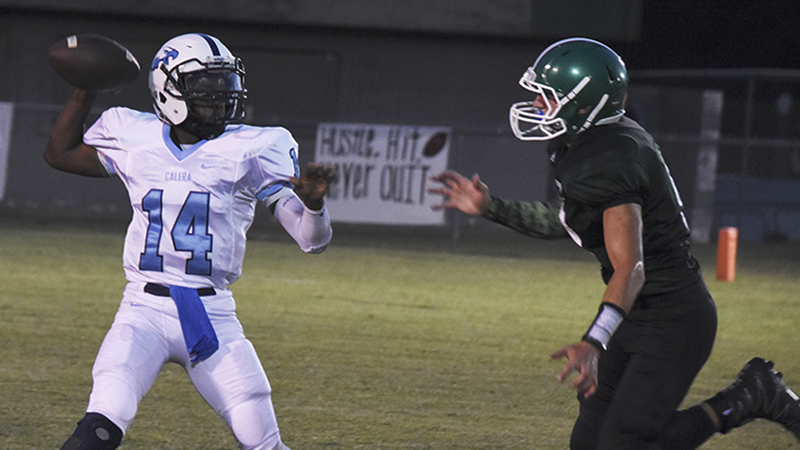 A Dallas County defender closes in on the Calera quarterback Jermaine Ross in last year’s 25-22 loss.

The Dallas County Hornets (0-1) will go on the road to face their first region opponent the Calera High School Eagles (1-1) Friday night at 7 p.m. in Calera.

Since 2014, the Calera Eagles are 3-0 against the Hornets. Last season, Calera defeated Dallas County 25-22 when Zach Ford made a field goal from the 28-yard line as time expired.

An early region game will be very important for both teams. The Hornets went 6-5 last season, which was just a game behind the second-place Eagles.

This year, the Hornets will be looking to avoid any déjà vu from 2016. The team lost its first two games to McAdory and Calera in back-to-back weeks. They were shutout by McAdory last Friday, but hope to finally get over the hump and defeat Calera.

“This week we’ve had a great week of practice, and we’ve corrected those mistakes from last week,” Dallas County head coach Cliff Matthews said. “Hopefully, we can go out and apply what we’ve corrected.”

Starting quarterback Octavious Palmer will be held out of the game due to a mild concussion he sustained during the McAdory game, according to Matthews.

“He probably could go, but we’re going to hold him out anyway just to keep him safe,” Matthews said.

Hunter Skinner will replace Palmer against the Eagles. Even though Palmer is a better runner than Skinner, Matthews said that Skinner has been able to step in and do everything he’s asked of him.

The Hornets are a run-heavy offense and will need to get the ground game working if they plan to have any success.

After studying film on the Eagles, Matthews said defending their passing attack will be a key of the game.

Matthews is still optimistic for his team and said that the mission is still intact.

“Our mission is to win the area and to do so we need to win Friday,” he said.

The Eagles are coming off a 25-12 win over Bibb County, but head coach Andrew Zow says his team still hasn’t quite hit their stride just yet.

“We’ve got a good group of guys, but at times we look our age,” Zow said. “We’re young at spots… overall I think we’ve got guys ready to get better.”

Two games into the season, Zow says his team hasn’t really shown a strength just yet.

Going into the season, he predicted the running game would be their strength, but they’ve been able to depend on their passing game so far.

“We lean on our receivers as a core to pull us through if we need to,” Zow said.

Special teams is usually a strength for the Eagles, but Ford is dealing with some minor injuries. He hasn’t been ruled out, but his usage will be limited according to Zow.

Last year, the Eagles turned the ball over five times and still escaped with a win. The key for the Eagles will be trying to contain the Hornets, according to Zow.

“They’re a very athletic team and pretty fast,” he said. “We have to hold our own when it comes to that. If we do our assignments we should be fine.”

The Selma High Saints (1-0) host the Bessemer City Purple Tigers (1-1) Friday night at Memorial Stadium for their first region game of the season. The Saints are coming off a big 52-6 win against their area rival Southside High School, and look to keep their momentum against a tough team in Bessemer City. The Saints have never beaten the Purple Tigers, and last year they were shutout 43-0.
Morgan Academy vs. Monroe Academy

The Morgan Academy Senators (1-1) will face the Monroe Academy Volunteers (3-0) at Friday night at Senator Field.

Last year, the Senators lost 61-15 to the Volunteers early in the season. They did, however, go on a three-game winning streak immediately after that loss.

The Senators have already avenged their first big loss against Marengo Academy in their season opener. Monroe Academy will be their first test within the AISA-AAA Region 2 class.
Southside vs. Prattville Christian

The Panthers have been slow to get started since their Jamboree game. The team didn’t look much better in their opening game against the Selma High Saints when they lost 52-6.

Both teams have struggled to keep their opponents out of the end zone. In just two games, Prattville has allowed 86 points to their opponents. They gave up 54 to Catholic Montgomery last week.
Meadowview Christian vs. Gunn Christian

The Meadowview Christian School Trojans (0-2) host the Gunn Christian Bulldogs (0-2) Friday night at Wasden Field. Both teams have had trouble scoring early in the season. They also have had issues slowing down their opponents as well. Both lost to East Memorial Christian already this season, but Gunn Christian only lost by 28, compared to the Trojans 42-point deficit.

The Keith High School Bears (1-1) follow up their first win of the season with a road match against the Aliceville High School Yellow Jackets (0-1) Friday night.

The Bears are coming off a 49-0 win at home as they head into this week’s matchup. This will be the second time these two teams have met. Last year, the Yellow Jackets defeated the Bears 48-8.
Ellwood Christian at Highland Home

The Ellwood Christian Eagles (0-1) are coming off their bye week to face the Highland Home High School Flying Squadron (0-1).

The two teams faced each other for the first time last season, and the Eagles lost that game 57-12.

Both schools also finished at the bottom of the 1A Region3 standings. The Flying Squadron finished in fifth place, while the Eagles came in last.