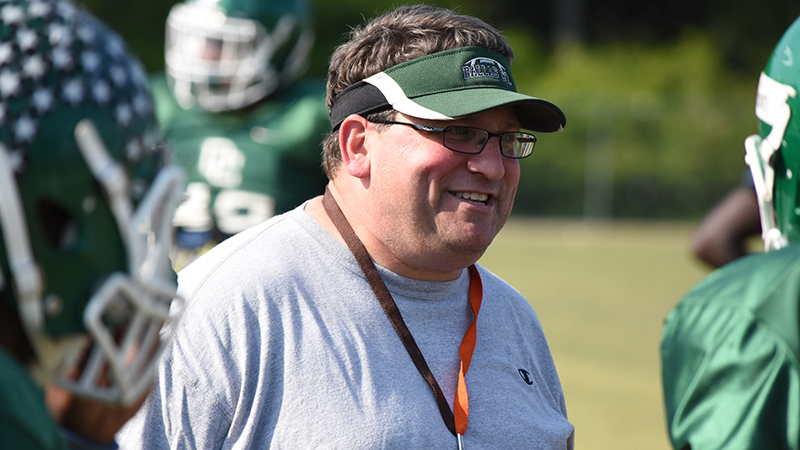 Dallas County High School coach Marty Smith announced last month that he was leaving the school at the end of the year. He’s accepted a job at Lincoln County High School in Tennessee, but is currently coaching the Hornets’ football team through spring training. --Daniel Evans

Dallas County head football coach Marty Smith was beside himself. It was the last day of spring training, just 24 hours from the Hornets spring game against West Blocton, and members of the offensive line had just missed a block.

“What are you doing?” Smith yelled. “What’s the fullback doing? He’s filling for the pulling guard!”

If anyone had been watching in the stands, they would’ve thought it was just another day of football practice, with a coach and a team destined to make another playoff run after two years in the postseason.

But Smith won’t be the coach at Dallas County next year and Wednesday was his last practice at the school.

“I told the guys when we decided that I was going to run spring training for the football team that we were going to go at it just like I was going to be the head coach,” Smith said. “I asked the kids to buy into it and the kids 100 percent bought into it.”

He was asked to lead the team through spring practice and agreed to it, but instead of focusing on the playbook, which could be entirely different next year, the Hornets have focused mainly on fundamentals going into Thursday’s game at West Blocton.

“He’s taught us what needs to be done, and now it’s our job to do it,” said senior offensive lineman Hunter Wolfe. “He may be leaving us but he’s still going to be with us. Every one of these boys out here that has been coached by him has a piece of him and what he’s said and the way he taught things and the way things need to be done.”

Smith resigned in April to move closer to family in north Alabama. He took the job with Lincoln High School last week.

Smith said he plans to stick with basketball in the future, just because it works out better with his family’s construction business.

On Thursday night, he’ll coach football at least one more as the Hornets take on the Tigers at 7 p.m.

He said at the end of the night he’ll probably get emotional.

“The thing I’m so appreciative of is how these kids have responded this spring,” Smith said. “They have come out here and done everything I’ve asked them to do and that shows you what kind of character these men have. I’ll go ahead and tell you there will be some tears tomorrow night when that final horn goes [off]. It’s going to be emotional.”