Meadowview can’t keep up with Brooklane in defeat 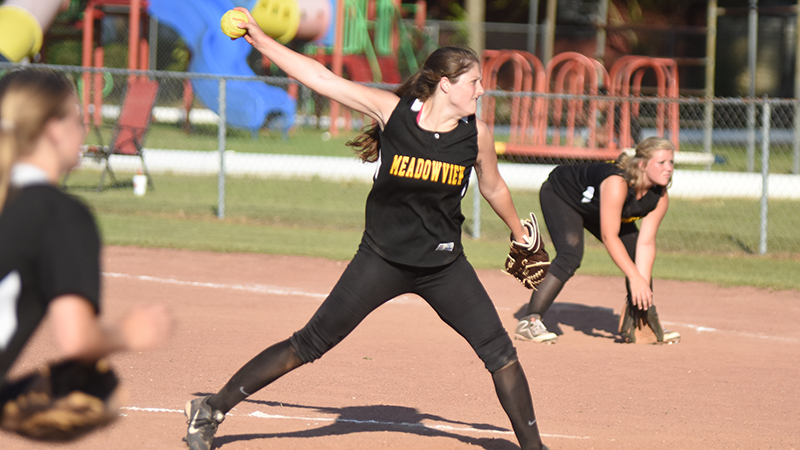 At the beginning of the season, even Meadowview Christian softball coach Bryan McIntyre admits he would’ve had a hard time seeing the Trojans in the position they were in Tuesday — one win from reaching the Alabama Christian Athletic Association semifinals.

In just a few short months, Meadowview had improved that much. Unfortunately for the Trojans, all that work didn’t reflect on the scoreboard Tuesday afternoon.

Brooklane Baptist outplayed Meadowview 14-4, ending the Trojans’ season in the sub-state portion of the playoffs.

“We started out playing Victory out of Millbrook, and we looked just awful,” McIntyre said.

“I didn’t have a lot of expectations but they are young and they got better. They still have a long way to go but to improve as much as they have, I couldn’t be prouder of them.”

Meadowview Christian didn’t have luck on its side Tuesday. Trojans pitcher Shelby Boswell, who had signed earlier in the day with Stillman College, hurt her hand sliding into third base in the third inning. The Trojans were down 6-3 at the time of the injury, but were still very much in the game.

“When that happened, you could just feel the air go out of them,” McIntyre said.

Boswell, Meadowview’s starting pitcher, had to be removed from the game, but had her pinkie taped up and talked her way back in.

“She begged to go back in against the trainer’s advice, but said if you have to you have to, but your dad has to say it’s OK,” McIntyre said. “She begged dad and her dad let her go finally. She tried. She struggled but she got us through that inning. She couldn’t grip, she couldn’t close her hand so she couldn’t bat. She finally decided that’s all she could do.”

Boswell came back in for one inning, but didn’t have her normal velocity. She walked Scout Wray, gave up a double to McKinzie Batson, allowed a single to Jayce Raymond and a triple to Hannah Sanford, but worked through the pain to get Tyresha Peoples and Christina Peoples to ground out to end the inning.

Mallory Freine had entered in relief for Boswell in the fourth and returned to pitch the game’s final three innings.

“I tried to pitch, but it hurt really bad so I had to come out,” Boswell said.

After the first inning, Meadowview led 3-2, but errors ended up derailing the Trojans.

Brooklane took the lead for good on a two-RBI single by Raymond in the third. Brooklane scored six more times in the fourth to pull ahead 12-3.

Meadowview managed one final run on a fielding error that allowed Reagan Burton to score, but it was too little too late.

After the game, McIntyre talked to the team about getting a jump start on practices for next year.

“We only have three seniors and everybody else is tenth grade and below and most of them are below, so if they want to be better they’ve got to work at it, and they can’t wait until softball season nears,” McIntyre said.