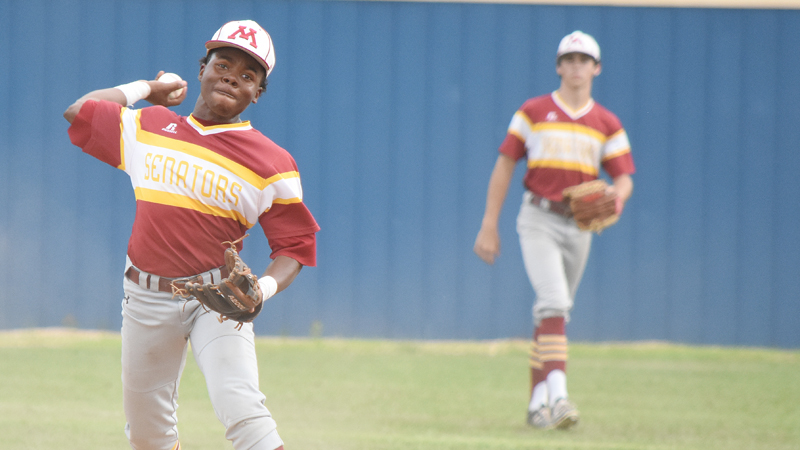 The Senators had their chances — and even led a lot of game two — but ended up falling 2-0 and 7-3. Pike will move on to play for the state championship against the winner of Monroe and Glenwood.

After the game, Pike celebrated in the outfield, while the Senators were understandably still trying to come to grips with what had just happened.

“They taught me so much,” said Morgan coach Josh Thacker while fighting back tears. “I’m 33 years old, and I’m still learning from them every day. They got me through the birth of my first son and they are winners. That’s all I can say about them.”

The Senators couldn’t get anything going against Pike pitcher Reece Burbage in the first game. Morgan managed only three hits and stranded seven base runners. Three of those came in the fourth inning, when the Senators loaded the bases with no outs.

In that inning, Burbage got out of the jam by forcing Bishop Price to hit into a double play and then got Xavier Green to strike out.

That’s as close as the Senators got to scoring the entire game.

Burbage finished the game with eight strikeouts and pitched all seven innings. The Patriots scored on a fielding error on a hit by Tristan Carter. Wood Jinright and Jade Sikes scored on the play and that’s all they’d need.

“We just couldn’t find it in game one,” Thacker said.

Morgan had trailed in three of its four playoff wins, so being down in a series for the first time didn’t seem to faze the Senators at all. Pike scored first in game two on a RBI single by Reed Jinright, but Morgan tallied the next three runs.

Sawyer Hopkins, Morgan’s starting pitcher in game two, helped his own cause with a single past Pike shortstop Hunter Jones in the bottom of the first. Hopkins scored Brayton Brown, who had led off the inning with a double to center field.

The Senators added two more runs in the second. Green and Bishop Price hit back-to-back balls off the left field wall — the tallest part of the wall — to get on base. If either ball had been hit to center or right field, they would’ve likely been a home run.

Morgan managed to get both runners home anyway. Britton Adams singled to center field to bring Green home to make it 2-1 Senators. Next, Landon Davis laid down a perfect bunt, which scored Green. Davis also managed to reach first safely on the play when Pike pitcher Reed Jinright misfielded the ball.

At that point, Morgan had the momentum and looked to be on its way to tying the series and setting up a game three tiebreaker. Instead, Pike was celebrating by the end of the night.

“Baseball is a funny game. The ball rolls different every time you come out,” Thacker said. “We came out in the second game and if I had a million dollars, which I don’t, I would’ve bet it all that we were going to win that second game. The ball just didn’t roll our way.”

Clay Barron singled to left field in the top of the fifth and both Hunter Jones and Cody Hollis scored to tie the game at 3-3. In the sixth, Hopkins was pulled after the first two Pike batters to reach base. Brown took his place and managed to get Jade Sikes to strike out, but couldn’t keep the Patriots off the board.

The second batter he faced, Trevor Barron, singled to left field, scoring Cole McWhorter and Wood Jinright to put Pike ahead 5-3. The Patriots added two insurance runs in the seventh off of a single by Tyler Hussey and a good swing by Jake Sikes, who hit into a fielder’s choice, but still scored Hussey.

Morgan Academy (22-9) won 11 of its last 14 games to end the season and finished the year ranked No. 10 in the Alabama Sports Writers Association rankings.