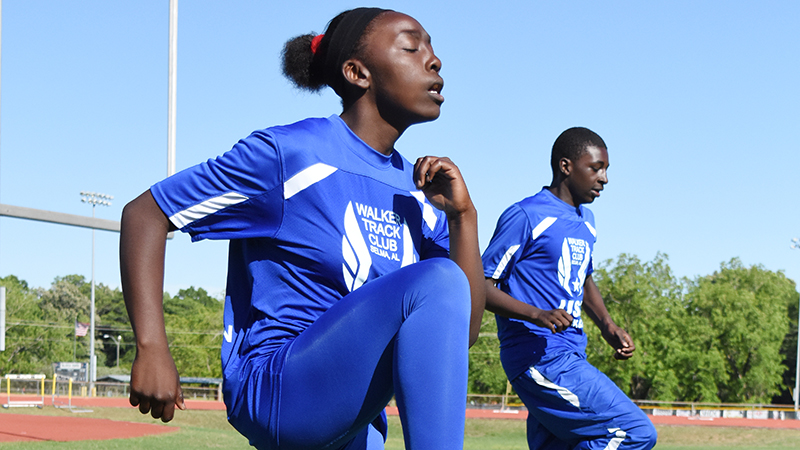 Ellwood Christian’s Rashni Walker, left, and Malachi Walker warm up for Monday’s practice at Memorial Stadium. Both will take part in the class 1A state track and field meet this weekend in Cullman. --Daniel Evans

Here’s a look at each school who had qualifiers and how they fared:
Ellwood Christian (1A)

Ellwood Christian will have siblings Rashni and Malachi Walker competing at the AHSAA state track meet in Cullman after both had strong showings over the weekend in Tuscaloosa. Both figure to have real chances at top five finishes in 1A.

“I’ve been waiting four years for this,” said Ellwood coach Jeffery Walker, who is also Rashni and Malachi’s father. “This is their first year competing in high school track and field so it’ll be interesting to see what it’s going to be [like.]

Both Malachi and Rashni take part in track and field events year-round as part of The Walker Track Club, a local organization run by their dad. The state track meet is the biggest event for most of the runners in this year’s field, but for Ellwood’s participants it’ll be just another meet.

They’ve already won dozens of medals from all over the country.

Despite her youth, Rashni enters as the top qualifier in both the 100-meter and 300-meter hurdles, so she’ll be one of the favorites going into the event.

“It gives me confident and to not be afraid,” Rashni said. “Ever since we started, I’ve been getting bigger and stronger because of what my dad is telling me to do instead of just laying around the house eating cake.”

Rashni said her main goal is to chase the state record in all three events. She said if she breaks the records, her dad has promised to buy her a puppy.

“I’m going to get the puppy I’ve been wanting my entire life,” she said.
Keith (2A)

Tyeshia Malone led the way with the third best 2A time in the girls 100-meter dash. She’ll enter that event as one of the favorites to win it all. R.C. Hatch’s Kamerria Fikes was the top qualifier with a time of 12.84 seconds. Malone will also participate in the girls 400-meter dash.

“It’s crazy because that’s one of her better times, but she can actually can go better,” said Keith coach Clifon Reeves.

Smith, Jones, Audreyiona Barley and Nekooshia Ayanna Peat qualified in the 4×100 meter relay with a time of 52.41 seconds.
Selma (6A)