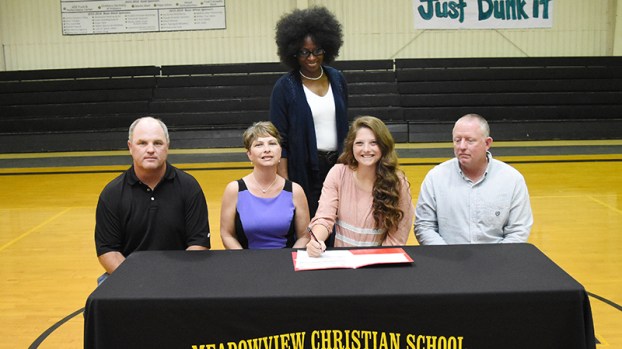 Freine signs letter of intent to play volleyball at Wallace

When Mallory Freine was 10 years old, she played football for Meadowview Christian’s termite team. At that point, she’d already been playing softball and she loved basketball, her favorite sport.

So, even then, it wouldn’t have been surprising to know Freine would be playing a sport in college one day. Nobody would’ve guessed that sport would’ve been volleyball though.

Freine, a three-sport star at Meadowview, signed a letter of intent to play college volleyball at Wallace Community College Selma Friday afternoon. She didn’t start playing the sport until seventh grade, but in her first year she played a big role on the Trojans’ junior varsity state championship team.

“I think I started playing because we won state that year and they didn’t have enough players,” Freine said. “They had like eight players and I just played just to play.”

She ended up being really good at it. Freine has been of the better players on Meadowview’s deep runs through the Alabama Christian Athletic Association playoffs in recent years.

Freine said she chose Wallace over Judson College, who also offered her, because it allowed her to stay close to home. It also means she can play with Meadowview graduate Christina Dabit, one of her closest friends.

“We hang out a lot and talk every day,” Freine said of Dabit.

She is also hoping to play basketball at Wallace, but hasn’t received confirmation on whether or not she made the team. Freine played point guard for the Trojans and is a shortstop on the Meadowview softball team.

“I need another defensive person and she is ideal,” said Wallace coach April Harper. “She hustles, plays balls outside of the court and she’s aggressive and I like that.”

Freine plans to become an early childhood special education teacher. After two years at Wallace, she will transfer, preferably to Auburn Montgomery.

Her parents are Roy and Sandy Freine.

Twice on Thursday night the Morgan Academy baseball team found itself backed against the wall and running out of chances... read more