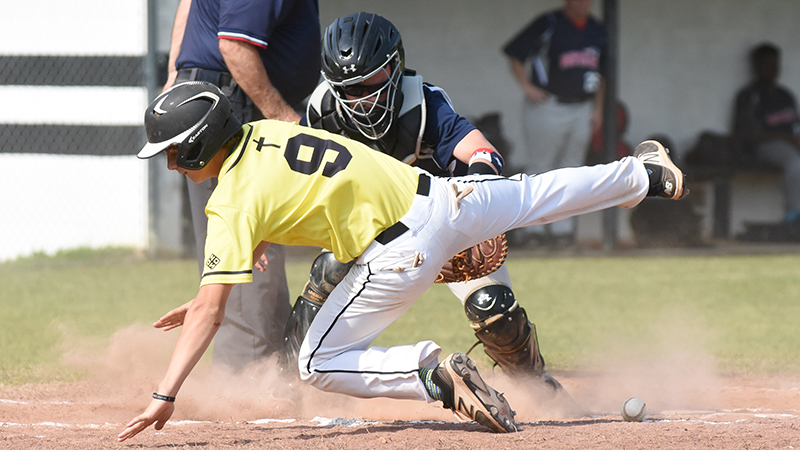 Meadowview Christian’s Jeremy Lee tries to catch himself after colliding with Emerald Mountain’s catcher during Thursday’s game. Lee was called out on the play. --Daniel Evans

The Meadowview Christian baseball team is on the verge of qualifying for the Alabama Christian Athletic Association playoffs.

The Trojans (8-3) jumped out to an early five run lead Thursday and coasted to a 10-2 win over Emerald Mountain. The win puts the Trojans at 8-3 on the season and within one region win of locking up a playoff spot.

“If we win Saturday against Cahawba, we should wrap up at least a No. 3 seed, which gets us to the playoffs,” said Meadowview coach Lebo Jones. “Last year we only won three games and this year we’ve won eight. Everybody has gotten a year older, which means a lot, and we’ve picked up a couple of new kids.”

The Patriots scored one run in each of the second and third innings, but Brech and the Meadowview defense shut them down the rest of the way. Emerald Mountain managed only three base runners in the final four innings of the game. Brech said having a big cushion allowed him to pitch more under control and with less pressure.

“It gives me more confidence to let them hit it so my defense can make some plays,” Brech said.

The Meadowview offense scored five runs in the first inning, giving Brech some breathing room to work with.

Brech helped his own cause in the opening inning, scoring off a play that involved a wild pickoff attempt at first base and a throwing error at third.

Jeremy Lee kept the momentum going with a single that scored Chambers McGilberry to make the score 2-0. Meadowview added two more runs when Chemar McGuire and Cole Smith crossed home plate after another throwing error. The fifth run was on a single by Zack Duke, which scored Keymon McGuire.

The Trojans added three more runs in the second — two off a single by Jack Barnes to take a seven-run lead. Zack Duke’s single was responsible for the other run scored in the inning.

The Trojans only scored two more times the rest of the way. The first came when Duke ran home on a wild pitch and the second was on an infield single by Chemar McGuire to put the Trojans ahead 10-2.

Meadowview loaded the bases in the bottom of the sixth but couldn’t score two more runs to end the game via the 10-run mercy rule. As it turns out, the Trojans didn’t need to.

Brech closed the door in the seventh, retiring the side, and getting Meadowview the win.

“Garrett pitched great. They put the ball in play against him, but we played good defense behind him,” Jones said. “It was just a fun game to watch.”