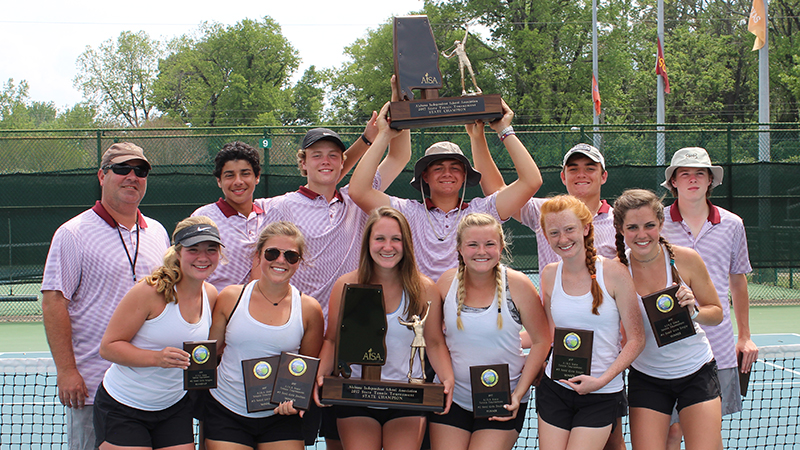 Emily Sherrer and Annie Talton had no idea how much was riding on their doubles match Tuesday afternoon. Looking back, they prefer it that way.

“[Coach] Baxter [Stinson] decided not to tell us because he didn’t want to freak us out,” Talton said. “He said just win it, it’s no big deal, but we found out at the end that it was the determining match for us to win first place. I was fine not knowing. I think that was the best decision to not tell us.”

The Morgan boys also won the state championship, breaking a run of five consecutive runner-up finishes, as the Senators swept both the boys and girls titles.  It’s the first time since 2011 Morgan has pulled off the double.

“They are a great group of kids that knew they had to put the work in to win state, and they were willing to do it,” Stinson said Tuesday, while grilling burgers at a celebratory barbecue for the team. “It wasn’t always fun and it wasn’t always easy and we weren’t always happy.”

“But we are now,” said Morgan senior George Jones, flashing a big smile from near the grill.

Tuscaloosa finished as the state runner-up on the boys’ side, followed by third place Springwood School.

On the girls’ side, Morgan had four girls play in singles championships and also won a doubles title.

In No. 2 doubles, Sherrer and Talton closed the day with a 6-2, 6-1 win over Bonhaus and Stripe to clinch a share of the title for the girls.

Sherrer had lost to Bonhaus 8-1 in the regular season, but she spent the week practicing against Pearce and Lilly Youngblood, two Morgan players who closely resemble Bonhaus’ game.

“I think that really helped me get ready for the match,” Sherrer said.