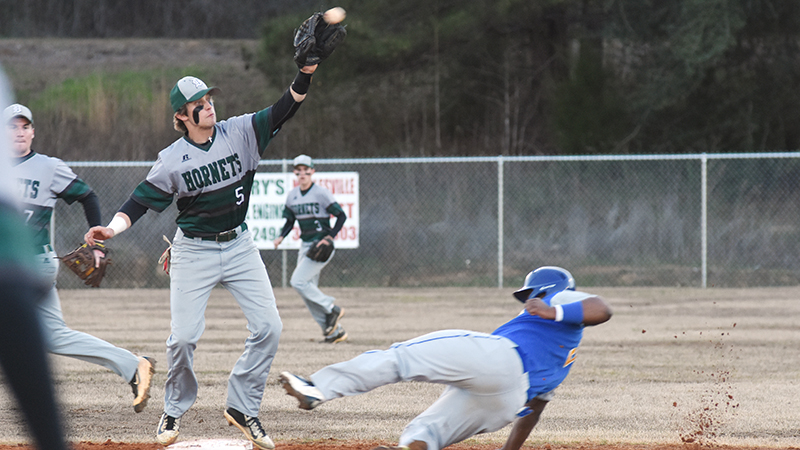 Dallas County’s Caleb Lester catches the ball at second base as Keith’s Ledell Jackson slides in trying to avoid the tag. The Hornets will face Demopolis in a key area game on Tuesday and then will face Maplesville on Thursday. --File Photo

The Dallas County baseball team has a great record and has clinched a playoff spot, but Hornets coach Willie Moore said his team still has a lot to prove.

Dallas County defeated Central Tuscaloosa on Friday night to clinch at least the No. 2 spot in class 5A, area 7. The Hornets play Demopolis on Tuesday with a chance to tie at the top of the area and if Dallas County wins that game, the teams will play a second game right after it to break the tie.

Moore said the Hornets current group of players have not won a game against Demopolis.

“It’s just a mental thing,” Moore said. “Teams have a mental edge, it’s not that their kids are any better. We’ve had some battles with them, but we didn’t play well when we played at their place.”

At the same time, Moore is trying to make sure his players aren’t satisfied with a great start to the year. Dallas County is 19-3, but the Hornets haven’t won a lot of games against top contenders.

This upcoming week, when they face Demopolis and Maplesville on Tuesday and Thursday, is a chance to see where they stand moving forward.

“We preach that every day. It wouldn’t matter if we were 3-19, we always have to improve and it’s got to be attitude,” Moore said. “We’re not a finished product by no means, and I feel like our best baseball is ahead of us. We just have to hone in and play the way we practice.”

Dallas County has not been hitting the ball well since spring break, Moore said.

The Hornets are also banged up. Several players could miss time next week due to injuries, but Moore said every team is dealing with those types of things this time of year.

“We’ve got shoulder injuries, foot injuries and ankle injuries and we’ve got some freshmen coming in and play some big innings. Our kids are giving us all they can and that’s all we can ask,” Moore said.

Dallas County has four games left in the regular season, all of them at home. The Hornets will also have at least one playoff game, but the site of that game is still to be determined.

Moore is retiring from coaching at the end of the year, so he’s said he’s just enjoying the final weeks — and hoping for as many games as he can.

“It means a lot to me personally, but I’m extremely happy for our seniors that they get a chance to go out the right way, and I’m happy for the younger kids who have never been part of a playoff situation,” Moore said.