After rainout, MA track team will be short of qualifying standard for AISA state meet 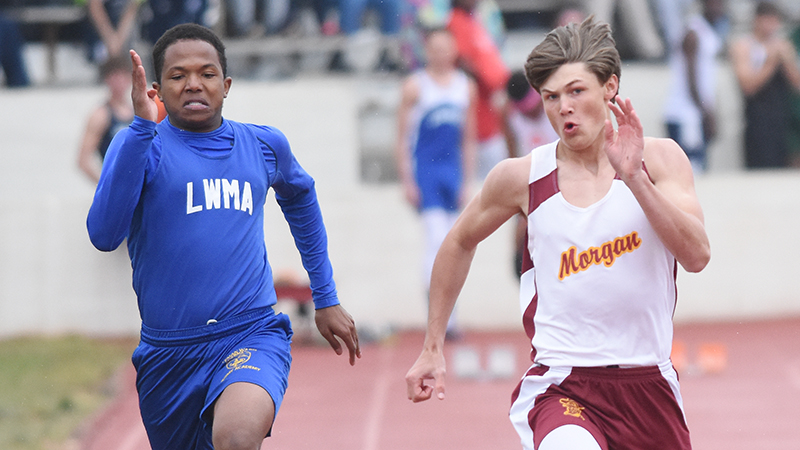 Morgan Academy’s Hardin Utsey races in the 100-meter dash during the Senators track meet in March at Memorial Stadium. Morgan had a track meet scheduled for Monday, but it was cancelled due to inclement weather. --File Photo

The Morgan Academy track team finds itself in a unique position after Monday’s track meet was rained out.

The Senators were scheduled to host their second meet of the year Monday at Memorial Stadium, but severe storms forced the cancellation of school and the track meet. Morgan track coach Rob Robinson said each school is required to take part in two track and field meets in order to qualify for the Alabama Independent School Association state meet.

The Senators have only had one, back on March 13, and even that one was cut short due to the weather. March’s meet only included track events due to a day of storms that left the field soaking wet and not in good condition for any events.

Robinson was already going to have to ask whether his field athletes could qualify after taking part in only one meet, but after Monday’s cancellation Senators that participate exclusively in field events have no results this year. No Senators’ track athlete has met the two meet minimum either, since the second track meet was rained out.

“I don’t know the answer yet,” Robinson said. “If you go by the rules, we won’t be in the state track meet.”

Robinson said rescheduling the track meet isn’t an option because other schools use the city stadium for practices and meets too. Morgan typically uses the track during seventh period a couple of times a week, and the Senators schedule their track meets in December, months ahead so that there’s plenty of notice.

“That’s not our track. Selma High has practice, and we can’t go in all of a sudden decide we want to have a track meet because we have to schedule around everyone else too,” Robinson said.

Robinson said he talked to AISA athletic director Roddie Beck about the possibility of severe weather last week, so they were already looking ahead. A call to Beck was not returned on Monday afternoon.

“Right now, it’s just a question mark, but I’m sure we’re not the only one in this boat,” he said.

Robinson said this is the first time he’s ever had a team in this position. The weather has not cooperated with Morgan’s track schedule in 2017, but that’s been the theme the last few years.

“We went 10 straight years and never had a track meet interrupted by rain,” Robinson said. “Then in the last three years, it’s been every year. We either lose a whole track meet or part of one, but we’ve never had a situation like this.”

Robinson said he’s not sure how many teams are in the same position Morgan is because Lee-Scott and Escambia Academy hosted track meets last week. The state track meet is scheduled to take place April 12-13 in Gulf Shores, so there aren’t any other regular season meets for Morgan to attend.

The junior high AISA track meet is Saturday at Escambia, and there are a couple of athletes on Morgan’s team that would be eligible for both the JV and varsity state meets.

Robinson said the JV meet will at least give the seventh, eighth and ninth graders a look at real competition. Some of those athletes may also be eligible for the state meet.

Robinson was hoping to get clarification in the next few days about Morgan’s eligibility moving forward.