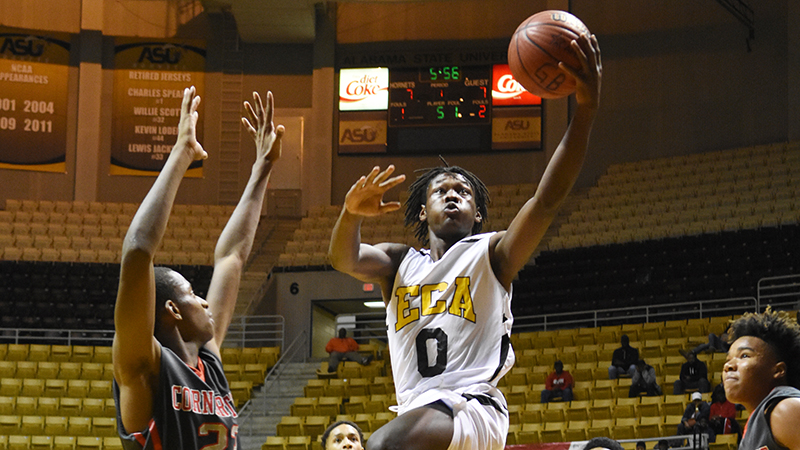 Ellwood Christian Academy’s Loveless Craig jumps for a layup during the 1A Central Regional championship game against Notasulga in February. --Daniel Evans

Loveless Craig’s importance to the Ellwood Christian basketball team can be summed up in one play from the 2017 season.

Craig, a junior, rebounded the ball against Notasulga in the closing seconds of a Central Regional semifinal game at Alabama State University. Knowing time was running short on the clock, he quickly threw the ball up on the backboard, beating the buzzer, and giving Ellwood arguably the biggest win in school history.

“I didn’t look at the clock,” Craig said. “I didn’t know what was on the clock. I had to go right back up.”

Craig is the Times-Journal’s Boys Basketball Player of the Year for plays like that one and for his effort throughout the season for Ellwood Christian.

“It’s mind blowing because you have a lot of great players in the city of Selma,” Craig said of the honor.

Craig finished with 16 points in the game against Notasulga, right around his season average of 17 points per game.

The Eagles would go on to lose to Cornerstone in the finals of the 1A Central Regional. Craig fouled out in the second half of that game and had to watch the final 5:03 of game action.

Ironically, that’s how his season started as well.

Craig had to sit out the first semester after transferring from Selma High School, so for the first two months of the year, he was relegated to a motivator on the bench.

“All I could do was clap and tell them to keep the good work going,” Craig said.

In his first game of the year on Jan. 5 against Marengo County, he showed the impact he could have. Craig scored 31 points in that game as Ellwood, already a top 10 team, got its first look at what it could look like full strength. With Chris Lee, Ja’mel Phillips and Justin Bufford all as capable scorers, Ellwood made school history.

It was a historic year, and Eagles coach Darrell Walker said Craig played an important role in the turnaround.

“Loveless Craig is a natural born leader and to me if your best player is your hardest worker, that makes it easy for you to be a coach,” said Ellwood Christian boys’ basketball coach Darrell Walker.