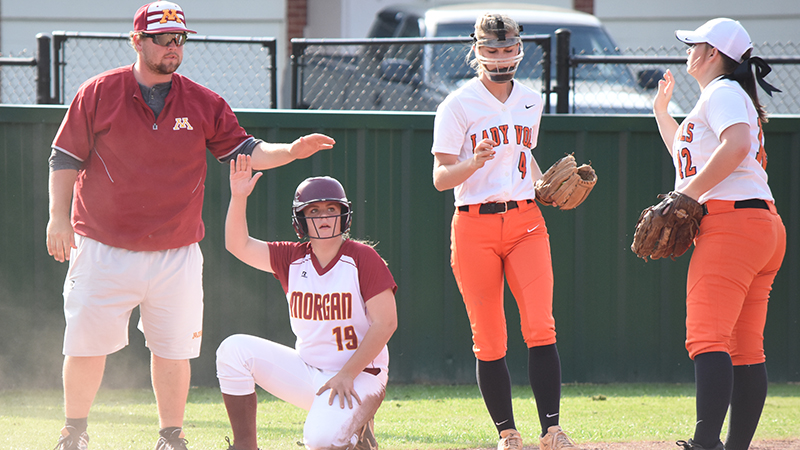 Chastain’s home run came off of Morgan Academy’s Sarah Gresham Jones, who had just entered the game for Ashley Horton. Horton threw the first four innings for the Senators and recorded two outs in the fifth before getting pulled.

Morgan (2-19) played Monroe nearly even for two innings, but gave up 14 runs over the final three.

“We’ve got to get more confidence up there when we’re up their batting, and we’ve got to keep playing like we did the first three innings because we were playing really well. Our pitching just has to get more consistent,” said Morgan softball coach Walker Lewis. “We can play with Monroe I believe; we’ve just got to be more confident in what we do.”

The Senators started the game impressively. Horton forced the first three Monroe batters to ground out and the Senators threatened to score in the bottom of the first. Grace Redd had a triple down the right field line, but Horton was unable to bat her in. Monroe’s Faith Stabler forced Horton to fly out, ending the inning.

“I’m very proud of her the way she has stepped up, being a ninth grader and coming around and being one of the leaders on our team,” Lewis said.

Monroe struck first in the top of the second on a wild pitch, but Horton shut down the rest of the scoring threat.

The Volunteers struck again in the third with four more runs. Two of the runs came off walks with the bases loaded, putting Monroe up six.

Meanwhile, Morgan couldn’t get much going with the bats. The Senators scored 28 runs in a win over Tuscaloosa Monday, but couldn’t keep the momentum going Tuesday night. Morgan went hitless in the second, third and fourth inning as Stabler rattled through the innings. At one point, she sat 10 consecutive Morgan players down without reaching base.

Monroe added six more runs in the fifth inning — with most of them coming off Chastain’s grand slam.

Morgan’s second hit of the game came on a single by Kenzie Horton to lead off the top of the fifth. Stabler bounced back, retiring the final Senators’ batters to end the game.

The Senators host Autauga Academy Thursday in their next game.