Not going anywhere: CCA basketball teams appear to be set for future 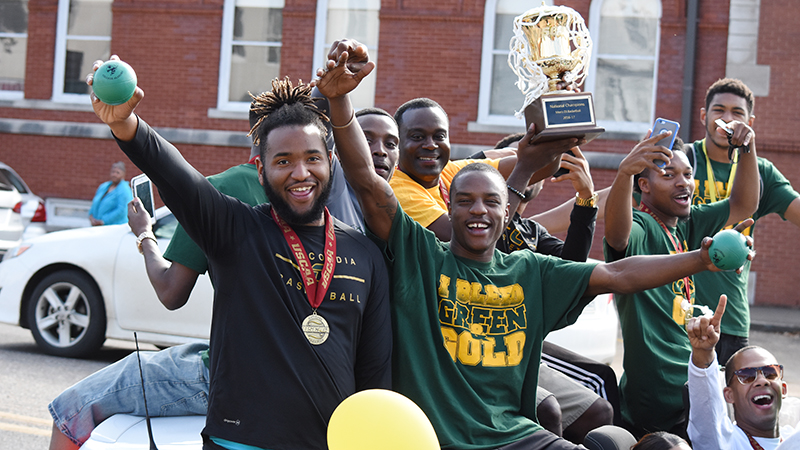 The Concordia College Alabama men’s basketball team rides on a car during the school’s parade.

Opponents in the United States Collegiate Athletic Association probably don’t want to hear it, but more than likely, neither Concordia basketball team is going to fade from contention any time soon.

The parade celebrating Concordia’s two Division I national championships — a USCAA first — was only two days ago, but it’s not too early for the coaches and the players to start looking ahead, and the future looks bright.

“I’m actually at a point where I’m ready to get back to work and get ready for the next one,” said Concordia men’s basketball coach Fredrick Summers.

The only senior who leaves is Dwight Waddell, who is expected to return as an assistant coach.

The entire nucleus will return for the Hornets, including leading scorer DeAngelo Anthony,  who scored 20.7 points per game, and Tavin Cummings, who scored 16. USCAA Tournament MVP Dennis Miles and Thurley Love — two more double digit scorers — will be back.

“The expectations are to two-peat and nothing less. We expect to go back next year and win it all,” Summers said.

The men will start with individual workouts the week after spring break, trying to get ready for another run at a title.

“We’ve already got the planning in place so we are ready to get to work,” Summers said.

The women’s team will try to do something even rarer than a two-peat — three championships in a row. Howard White’s team will lose three seniors, but the expectations are still the same.

Shuntavia Harris, Carshava Sutton and Lashanique Youngblood — three of the team’s four leading scorers — all graduate. That’s 40 points the Horents will have to replace.
“That’s a big loss, but we’ve got a great recruiting class that’s coming in,” White said. “I’ve got a couple of kids that are sitting out this year that will be able to play next year and also our returning players that are coming back are very, very good.”

Traniya Pitts, a freshman on this year’s team, was the tournament MVP after scoring 23 points in the championship game. She headlines a group of returning players that will also feature rising senior Kimberly Clark, who scored 13 points per game this year.

“We have a great chance to be better than we were this year,” White said.

MCS’ Boswell plays softball year round and plans to…