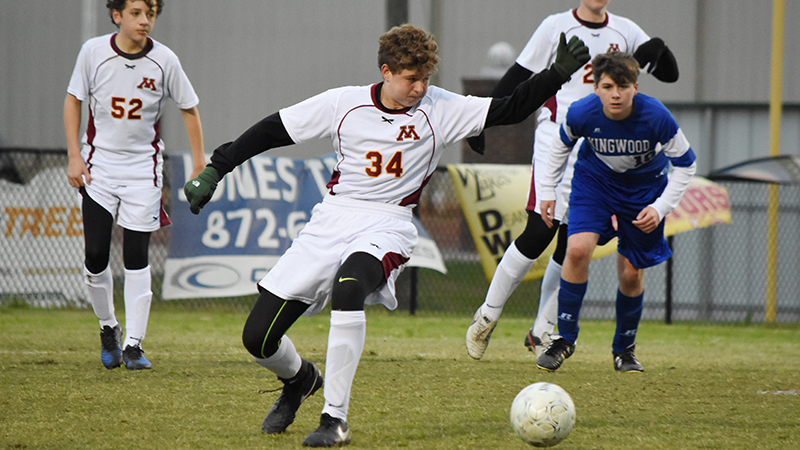 Sometimes it’s just not your night.

On Tuesday in frigid temperatures, the Morgan Academy boys’ soccer team had more shots on goal than Kingwood Christian but couldn’t break through.

Cameron Donohoo and Drake Smith scored to lead Kingwood to the 2-0 win, dropping shorthanded Morgan to a 2-6 on the season.

The Senators might’ve realized it wasn’t their night when Donohoo’s free kick bounced off a Morgan player in a wall formation and somehow found its way past goalie Derrick Mueller and into the net.

The goal came at the 18 minute mark and put Kingwood up for good.

“We had it played right, the wall was right and we just got a bad deflection,” said Morgan coach Jay Minter. “There was nothing the goalie could do.”

The Senators had several scoring chances in the first half, including a shot by Wade Mason that bounced off the top of the crossbar and deflected back into the field of play.

Daniel Portwood had a couple of good looks in the first half too, but he missed high and wide after an impressive possession that showed off his ball handling skills down the sideline.

“If a few of them had gone, it could’ve lifted our spirits,” Minter said.

Smith’s second half goal came off a fastbreak opportunity at the 61st mark.

Minter said the Senators were pushed up into the midfield and got beat back down the field for the goal.

Portwood had several close looks in the second half, but none of them found the net. He missed high at the 66th minute, had his shot stopped by Kingwood goalie Ryder Mott at the 70th minute and was just wide at the 78th minute.

Cooper McKinney’s free kick in the 78th minute looked good the entire way, but it landed in Mott’s hands.

“We had lots and lots of chances,” Minter said.

The Senators have struggled with depth all season long, but Kingwood was about as close as it gets to an equal numbers game. Kingwood had only 12 players, meaning one sub, while Morgan had 11.

“Sometimes we have 12, occasionally we have 13, usually we have 11,” Minter said. “We are younger, we are smaller, less numbers. It’s hard to win games. We’re learning and growing.”

The Morgan-Kingwood girls game was postponed until a later date.