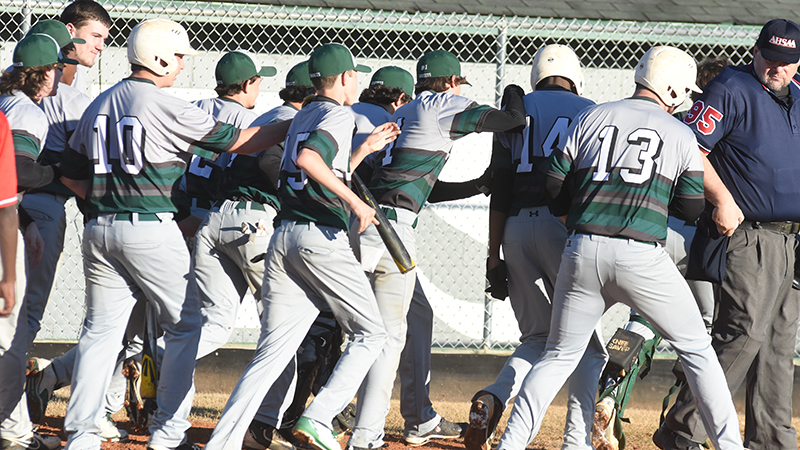 PLANTERSVILLE — Dallas County’s Jackson Whitaker’s RBI single in the bottom of the seventh inning rallied the Hornets past Southside for a 9-8 win Friday in a game that was worth the price of admission and then some.

The Hornets led 7-1 after a four run sixth inning and appeared to be on cruise control, but the shorthanded Panthers scored seven times in the top of the seventh to take the lead. With their backs against the wall, the Hornets answered in the bottom half of the inning. Joseph Jones’ ground out brought Hunter Skinner home and Whitaker’s single ended the game in walk-off fashion.

“We had a six run lead and we kind of relaxed and our guys forgot we were in a game with our rival,” said Dallas County coach Willie Moore. “When we thought the game was over, they managed to battle back and take the lead.  Lucky for us we had the last at-bat.”

Southside had three players leave the game, leaving the Panthers shorthanded in the infield. Kenyon Walker was injured in the second inning and two players were ejected later in the game. An umpire ejected one player for talking to players in the Dallas County dugout while on the field and the other ejection came in a pivotal moment in the top of the seventh inning on Southside’s run that gave the Panthers the lead.

Despite that, Southside coach John Solomon had a lot to be proud of. The Panthers (1-5) rallied from seven down and gave themselves a chance in a game that looked over.

“I’m proud of my team,” Solomon said. “They played with a lot of heart and they stepped up when they needed to step up.”

Dallas County led 7-1 at the top of the seventh, thanks in part to a second inning home run by Octavious Palmer. Pitcher Caleb Lester had given up only one run in six innings, but he was pulled because he hit the daily pitch count limit.

Andre Smith came in to pitch for the Hornets in the seventh and Southside seemed to have his number. The Panthers scored on a single and a wild pitch to get within four. DeQuan Johnson hit a dribbler back to Smith, but he overthrew Dallas County catcher Hunter Skinner and another run scored.

Keshawn Arrington and Javon Colvin walked with the bases loaded, bringing Southside within 7-6. With two outs in the inning, Jones came up with the biggest hit of the game at that point. His single to center field scored both Johnson and Arrington to put Southside up 8-7, but controversy followed.

One of the Southside runners were ejected for throwing an elbow as they crossed home plate. The run still counted, but the player had to leave the game.

“I hate that it came down to that because they still would’ve been batting,” Moore said.

The Panthers played the final half inning with three players in the infield that usually don’t play in the positions they were in.

“I just plugged them in where I thought they could play,” Solomon said.

Skinner was hit by a pitch to begin the inning and that turned out to be huge because it allowed him to score on Joseph Jones’ groundout. Whitaker had replaced Smith on the mound in the top of the inning and had given up the final three runs, though they weren’t all his responsibility alone.

Nonetheless, his hit at the end of the game more than atoned for any runners that scored and gave Dallas County its own come from behind win.

“For him to be a freshman and come in and do what he did, I was pleased with that,” Moore said. “For him to come through like that was huge for us. I’m just disappointed overall in our team effort today. It stunk.”

Arrington was the starting pitcher for Southside and he pitched until midway through the sixth inning, when Jones relieved him.