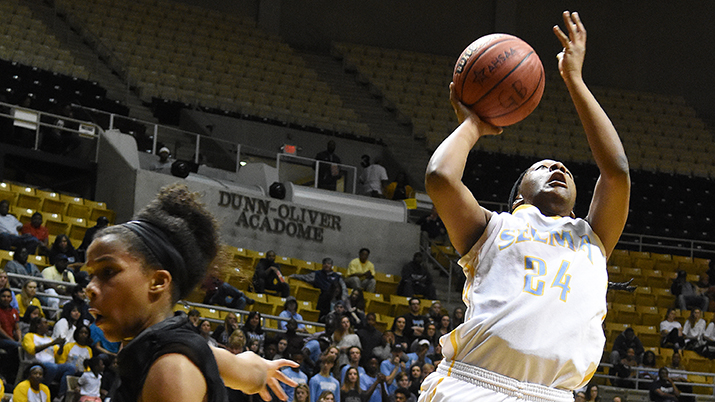 Most of the county has turned its attention to baseball, softball or track and field, but two local schools are still focused on basketball and the possibility of a state championship.

Selma’s girls’ basketball regrouped at halftime Friday and rallied past a Helena team that had given it trouble in the first half. The Saints will play in the 6A Central Regional Final Tuesday against Hillcrest-Tuscaloosa, a team it shared an area within in 2015 and 2016.

Ellwood Christian didn’t shake Notasulga the entire game Friday, despite leading by nine in the third quarter. The Eagles needed a last second, buzzer beating layup by Loveless Craig to save their season and to advance to Tuesday’s 1A Central Regional Final against Cornerstone Christian.

Both teams are one win from punching their ticket to Birmingham and three victories from a state championship.

“We saw Cornerstone two games before our game,” said Ellwood coach Darrell Walker. “They’ve got good shooters, a good post player. We are going to go back to Concordia [for practice] and do what we do best. We are going to try to break down the film, break down Cornerstone and we’ll try to head back up here Tuesday and head to Birmingham. Three more games — that’s our motto.”

“We are going to look forward, look ahead,” Harris said, just minutes after Friday’s win.

The Saints (27-2) will probably want to spend every possible moment preparing for Hillcrest, which enters with a 30-2 record and the No. 6 ranking in the state. Twenty nine of Hillcrest’s 30 wins this year came by double digits.

Ellwood (15-9), ranked No. 8, enters as the higher ranked team against Cornerstone (14-9). Cornerstone, which also has an Eagles mascot, defeated Wadley 85-78 to reach the 1A quarterfinals.

Selma will play Tuesday at 12:30 p.m. Ellwood will follow at 5:45 p.m. Both games will be played at Alabama State University’s Dunn-Oliver Acadome.