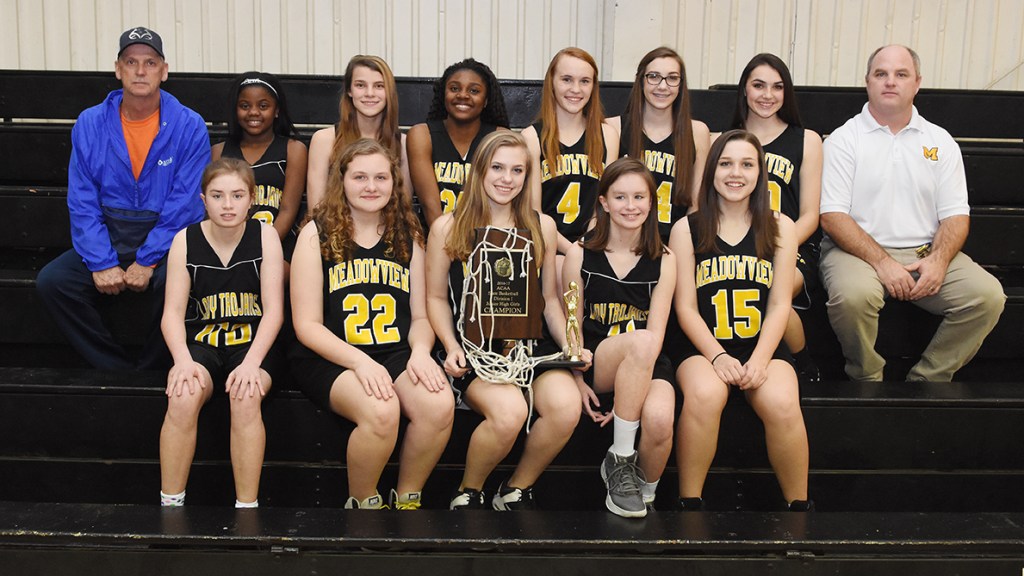 The Trojans (10-2) overcame an 0-2 start to win their last ten games of the year. In Saturday’s tournament, they used suffocating defense to pull out wins over Marshall Christian and Tabernacle Christian.

“From the beginning of the season last year to how far we’ve come this year is amazing,” said Meadowview coach Lebo Jones. “I think we scored two points in the first game we played two years ago the whole game. To come this far and win a state championship is an amazing thing, and it’s just great for the girls.”

Meadowview held Marshall Christian scoreless in the first half of their semifinal game. Marshall made only two field goals the entire game as Meadowview won 12-4 to advance to the championship game.

After the game, the Trojans cut the net down in celebration.

“That was definitely once in a lifetime,” KaLee said. “That was fun and we waited to let all the younger girls do it before we did at the end.”

Erin McIntyre said the team’s three ninth graders did their best to keep their emotions in check Saturday.

“We knew we were going to have to stick it through and play good defense and hold them,” McIntyre said.

The Meadowview junior varsity team had 11 players, but due to the youth of a lot of the team, the Trojans mainly stuck with a six player rotation. Lebo called them the “super six” because of how well they played throughout the year. All six of those players also played varsity and KaLee and McIntyre actually start in both varsity and junior varsity.

“It really makes us want to practice and really want to get better,” said Kenley Kaufman, who started playing three games into the season.

The Meadowview varsity girls will try to follow the lead of the junior varsity. The Trojans play a sub-state game Friday at Tuscaloosa Christian.