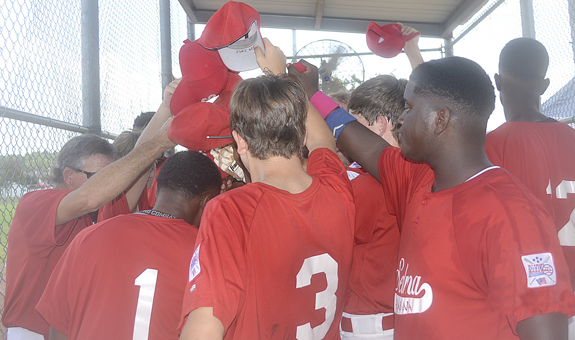 The Selma Dixie Boys Baseball team breaks down the huddle during its game Sunday against South Carolina during the World Series in Pineville, Louisiana. –Submitted Photo

Selma lost to Columbia County, Georgia 12-2 to finally succumb to elimination, hours after rallying from three down against Arkansas to stay in the tournament. The team had come from behind so many times throughout its run, but an early 7-0 deficit was too much to overcome.

“We were flat that second game,” said Selma coach Ricky Waters. “They were give out.”

Before the Georgia game, Selma had only about an hour to rest following a thrilling rally over Arkansas earlier Monday. Selma won that game 13-12 after coming from three runs down in the tenth inning.

In that game, Selma stepped to the plate on two separate occasions knowing it was only three outs from being eliminated from the tournament.

Both times — in the seventh inning and in the tenth — Selma rallied.

While that win kept Selma alive in the tournament, it depleted the team’s pitching staff. Four pitchers had to step to the mound in the Arkansas game, leaving T’Darrious Olds and Amarian Molette to lead the staff against Georgia.

Both Olds and Molette had also pitched against Arkansas, but neither had hit their pitch count limit and were eligible to throw again.

“We just ran out of pitching today,” Waters said. “Arkansas is a feisty team and it took us a while to beat them.”

That game didn’t finish until almost 8 p.m. and the Selma-Georgia game started at 9:30 p.m.

The tournament is being played in Pineville, Louisiana and will wrap up Wednesday.

Before falling out of the tournament Monday night, the Selma baseball team showed it doesn’t know how to quit. Facing long odds, the team rallied from three runs down to stun a team from Sevier County, Arkansas during the Dixie Boys World Series Monday night.

Selma was down 12-9 in the tenth inning, but scored four times in the final inning to keep its hopes of a World Series championship alive. Amarian Molette had a sacrifice hit to bring in the game-winning run and to send the Selma dugout into a frenzy.

“They went crazy and the coach went crazy,” Waters said with a laugh.

“We’re one of the last teams standing. Six have been sent home.”

A.D. Tate started that game at pitcher but Octavious Palmer was credited with the win after Selma’s come from behind victory.

“We scored one, the next one, scored the next one and finally pulled it off,” Waters said.

Waters said the team huddled between every inning and that the message didn’t change when the pressure mounted in the final innings.

“I told them after every inning when they would come in and we would need a run just to stay in it, to keep fighting guys, leave it on the field and don’t have any regrets.”

Selma led 4-1 early after home runs by Olds and Milam Turner. Arkansas bounced back to lead the game 8-6 before Selma tied it up at 8-8 in the bottom of the seventh.