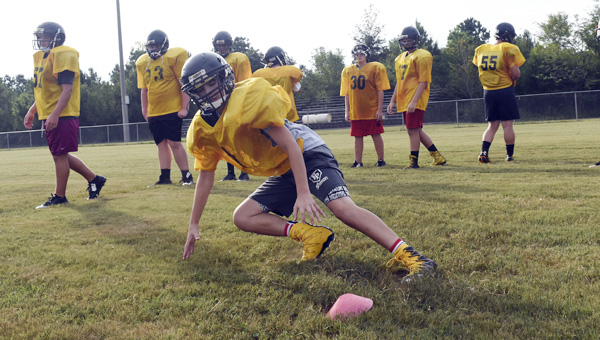 Teams in the Alabama High School Athletic Association held their first official football practices Monday, but it’s doubtful any of those teams are as far along in their offseason work as Meadowview Christian.

The Trojans, which play in the Christian Football Association, started practices last week and were already in shoulder pads on Monday.

“Luckily, we started last week, so we have a week under our belts, but this is going to be the first real serious week of practice.” said Meadowview Christian coach Lebo Jones. “We will see who likes contact and who doesn’t.”

The Trojans have just over a week until their scrimmage at New Life Christian on June 12. Tabernacle, Ballard Christian, New Life and Meadowview will take part in the scrimmage.

With only a handful of practices left until those games, Jones and assistant coach Darren McGilberry spent Monday teaching the Trojans how to properly tackle.

Each player took a turn tackling a tire — called a tackling tire — before pairing up to step through a basic tackling drill.

“Last week, we did some tackling drills with a tackling dummy, but this week we have shoulder pads on so we can do some live stuff,” Jones said.

Meadowview had 16 players at Monday’s practice and two others were expected to join practices later this week.  Compared to previous years, that’s a lot of players for the Trojans this time of year.

Jones credits the turnout to the team’s success last year. Meadowview made it to the CFA semifinals last year and hosted a playoff game.

Seven players off of last year’s team return this year.

Meadowview has been working out since early June.

Jones said this team is farther ahead at this point than the last few years.

“This has been the best year since 2012 as far as particpation, numbers and people coming to workouts,” Jones said.

Jones said the goal is for the school to be playing 11-man football again in a couple of years.  He’s served as the recreation director for the Selma Parks and Recreation Department since April 2015, but is leaving this week to start a full-time position at Meadowview.

Without having to do both positions, he said he’ll have more time to dedicate to the Trojans’ football team.

“There’d be sometimes I’d have to go to a meeting, and we’d have to practice short, but now that I’m going to be here all day we can start practice a little earlier during P.E.,” Jones said.

“It’ll be a lot better for the school and for me as far as the football program.”

The Trojans open the regular season versus Victory Columbus in an 8-man game on Aug. 19 at 7 p.m.