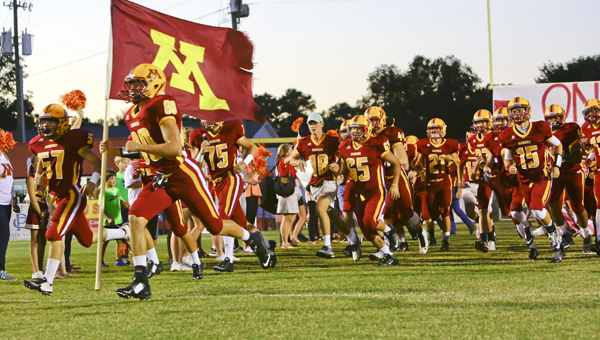 EDITOR’S NOTE: This is the sixth story in a series of football schedules previews for the seven teams from around Selma and Dallas County.

Morgan Academy will only play one home game before Sept. 30 this upcoming football season.

Fortunately for Senators fans, that means they’ll get to see Morgan play in Selma a lot during October.

The challenge for Morgan and first year head coach Josh Thacker is to make sure the Senators are in a position where those home games are meaningful in the playoff hunt.

“At the end of the day, what you’re trying to do is by weeks seven, eight and nine you are trying to play your best football,” Thacker said. “You hope by week seven you are almost at your peak and you want that to continue throughout the playoffs.”

That’s the good news — home games when the weather starts to turn colder and the games start taking on extra importance.

The problem is the first five game stretch.

The Senators open the year with games against Marengo Academy, Tuscaloosa Academy and Monroe Academy —teams that won a combined 30 games last season.  The Senators will play at Marengo Academy on Aug. 26. This year will mark the first time the teams have played since 2009.

The Senators will host Tuscaloosa on Sept. 2, a team they came from 15 points down against in a 36-29 win last year.

On Sept. 30, Morgan Academy will play its first home game in four weeks when the Senators host Clarke Prep. The Senators lost their season finale to Clarke Prep 34-28 last season.

On Oct. 7, Morgan Academy will host Fort Dale, a team that defeated the Senators 28-20 last year. Morgan will hit the road for its final road game Oct. 14 at Northside Methodist Academy before finishing the season with home games against Pike Liberal Arts and Autauga Academy on Oct. 21 and Oct. 28.  The games against Northside and Pike Liberal Arts are region contests.