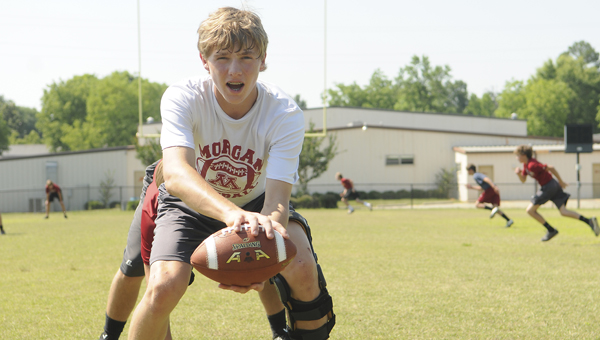 While nearly every high school team in Selma and Dallas County is enjoying its offseason, the Morgan Academy football team is spending this week on the practice field preparing for next season.

For Morgan, extra time is exactly what the team needs. From new coaches to new players to new plays, the Morgan football team won’t look like it did last year.

Morgan has replaced its head coach, offensive coordinator, and the team will need to fill a spot at starting quarterback, running back and No. 1 wide receiver, to name a few.

With many seniors departing from last year’s team and a new playbook to learn, Morgan’s first-year head coach Josh Thacker knows this offseason won’t be the same as last season.

While there are many positions up for grabs, Thacker’s isn’t concerned about finalizing his depth chart in his first week of summer practices. His focus is on getting his players to learn a new offensive scheme that he believes will be more tailored to the skill set he has this season.

With senior quarterback Harrison Adams departing, Thacker said there are currently four or five players who could take next year’s starting position. Nonetheless, Thacker wants to run the football more than Morgan did last season.

“I’m an old school guy who likes to run the football, so we’ll just have to see how we work into it,” Thacker said.

Defensively, Thacker isn’t planning on switching up too much from the 4-3 formation that former head coach Jake Wingo ran last season at Morgan.

“We’ll be running some different coverages for them to try to throw off some teams, but at the end of the day I think it’s probably going to be about the same thing,” Thacker said.

Thacker, who coached at Pickens Academy last year, said he is familiar with most of Morgan’s opponents, notably Marengo and Clarke Prep. He’s faced both teams multiple times in recent years, and he is looking forward to the challenge each opponent will present.

Absent from Morgan’s 2016 schedule is Alabama Independent School Association powerhouse Edgewood Academy, which has beaten Morgan and every other team handily as of late.

While not having Edgewood on the schedule could be a relief for some, Thacker doesn’t see it the same way.

Thacker wants Morgan to be the best, and in order to reach that point, Thacker said the Senators will have to beat Edgewood eventually.

There’s a lot to learn over the summer if Morgan plans to build on its 4-6 season last year. Thacker is prepared to lead Morgan to where he knows his players eventually want to be.

“It’s a tough road ahead of us,” Thacker said. “We’ve just got to buckle down, try to do the best we can and get the most out of what we’re doing.”