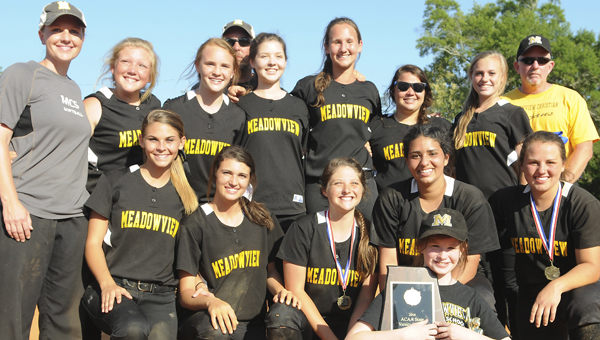 Three outs separated the Meadowview Christian Trojans from an Alabama Christian Athletic Association state championship over the New Life Christain Eagles, but the pitcher they’d relied on all season had just sustained an injury sliding into home plate.

Christina Dabit took the mound in the bottom of the seventh inning, while Shelby Boswell, who had planned to finish out the game at pitcher, was carried into a car behind the dugout with an icepack on her knee.

New Life Christian didn’t even get on base in the bottom of the seventh inning, and Meadowview won its first ever ACAA state championship 8-7 in a winner-take-all game after losing the first game 11-10 in extra innings Saturday at New Life. It was a bittersweet moment for the Trojans because they lost one of their best all-around players to what appeared to be a serious injury, but it also proved to be a rallying push to give the Trojans the energy they needed to close out the game.

“[Shelby] knows we won this because of her,” said Meadowview shortstop Mallory Freine.

Meadowview head coach Cherie Grimes said it felt good to come back to the state championship game this season and produce a different result, because last year New Life beat Meadowview to win the state title.

“It feels really good to come back and make them fight for it, and come out on top,” Grimes said.

Meadowview took control of the game right from the start. Boswell struck out the first batter, Dabit threw out a runner on a ground ball and Emily Skelton caught a fly ball in left field to end the top of the first inning in three batters.

It didn’t take long for the Trojans to take a lead. Freine opened the bottom of the first inning with a single to shallow left field, and Kalee Jones successfully laid down a bunt to put runners on first and second base.

Maggie Tipton crushed a pitch to the center field fence, allowing Freine to cross home plate for a 1-0 lead. Christina Dabit added to the lead with a ground ball RBI that brought Jones home safely.

New Life cut the Meadowview lead in half in the top of the second inning when 12 made it home on a Trojans throwing error.

In the bottom of the second inning, Tayler Roberts was hit by a pitch and Kameren Burton followed with a bunt to put herself on first base and Roberts to second base. After Roberts was thrown out at third base, Freine hit a ground ball to shortstop. A mental error caused New Life to miss the force out at first base and Burton scored as a result.

A couple batters later, the bases were loaded with Boswell at the plate. With two outs, Boswell drew a walk to send home Freine and give Meadowview a 4-1 advantage. A Dabit groundout at the next at-bat ended the inning.

In the top of the third inning, two consecutive Meadowview fielding errors put New Life runners on first and second base, but the Trojans escaped without allowing any runs when Freine flipped a ball to Dabit at third base for the third out.

Alyssa Verhoff opened the bottom of the third inning reaching first off a ground ball that rolled underneath New Life third baseman Rachel Poore, and Lauren Ross brought her home with a line drive double to make it 5-1.

With the score tied 5-5, Jennie Blevins drove home Madison White on a ground ball past shortstop to give New Life its first lead of the game.

Verhoff knotted the score at 6 when she hit a line drive single in the bottom of the fourth inning to bring home Boswell.

It only took one pitch in the top of the fifth inning for the Eagles to regain the lead. Julianne Wilkes hit a home run over the left field fence, putting New Life ahead 7-6.

In the top of the sixth inning, New Life added three runs to take a 10-6 lead, but Meadowview wasn’t done just yet.

Meadowview started the second game the same as the first game. Three runs in the top of the first inning put the Trojans up 3-0 early, and Dabit, taking over for Boswell at the mound, made it a seamless transition.

By the bottom of the third inning, however, the Eagles had tied the game up 3-3.

There was a lot of scoring in the top of the fourth inning again in the second game, except this time it was Meadowview putting the runs on the board.

Roberts opened with a double and Ross drove her home. Freine followed with a double that sent Burton to home plate to take a 6-3 lead. Finally, Boswell hit a single down the third base line, allowing Jones to reach home and giving the Trojans a four-run advantage.

After White and Wilkes scored in the bottom of the fifth inning to slice Meadowview’s lead in half, Boswell came back out to replace Dabit at pitcher and threw a strikeout to end the inning with the Trojans still leading 7-5.

White scored another run in the bottom of the sixth inning, tying the game at 7-7. Dabit hit Boswell home in the top of the seventh inning, but she landed hard on her knee, and it was immediately clear her day on the field was done.

When Dabit came back on the mound to try to close out the game, she trickled a couple pitches through the dirt, and Tipton met her halfway to the mound to talk with her.

“She told me that it’s just me and her on the field and no one else matters,” Dabit said.

Dabit followed with a strike out, and her teammates quickly flooded around her to celebrate Meadowview’s first state title in a varsity sports since the 1980s.

“I couldn’t have asked for a better last year, especially with these girls,” Tipton said. “It means everything to me.”