McDougal fights off injury to compete at state 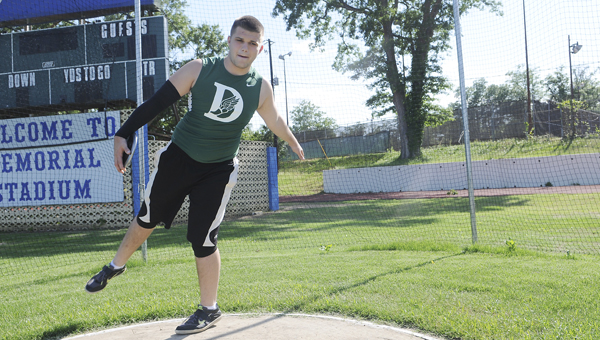 Dallas County’s Caleb McDougal had surgery on March 21 to repair severe tendinitis in his knees. It’s been just over six weeks since the surgery, and he’ll be competing at the class 5A state track meet Friday at Gulf Shores in the boys’ discus throw. — Justin Fedich

Six weeks ago, a doctor told Caleb McDougal he wouldn’t be able to throw discus for six weeks to three months following lateral tenex surgery to repair severe tendinitis in his knees.

McDougal waited about three weeks after the surgery before he was throwing discus again. He needed time to heal, but more than anything, McDougal wanted to make sure he qualified for the state track meet.

“I knew I was throwing no matter what,” McDougal said. “I didn’t care what the doctor said. He wasn’t going to keep me out of the circle.”

At 6-feet, 225 pounds, McDougal is the size of a typical discus thrower, but his path to reach the state meet as a senior has been anything but typical. The 18-year-old Dallas County High School swore into the Army last summer, wrestled with injury the entire year and defied odds simply to stand in the eight-foot circle in Gulf Shores Friday, where he will compete against 24 other discus throwers with the same goal as him.

His perseverance hasn’t surprised those close to him, especially his mother Sheryl.

“When he sets goals, he’s going to do everything in the world he can to do it, including the Army,” Sheryl said.

In eighth grade, Caleb was a distance runner on the Dallas County track team. He ran the one mile and the two mile, but he quickly realized neither event was something he excelled at.

During his freshman year, Caleb tried throwing discus for the first time. On his first throw, he tossed it 87 feet, above average for someone new to throwing a discus. He quickly realized this was an event he could succeed in.

Caleb set a goal to make state his freshman year, and falling just shy motivated him to do even better next year. As a sophomore, he improved by 15 feet, throwing the discus 111 feet to earn him the trip he wanted.

“When I hit that 111, I was psyched. I was amped, and I went to state that year for the first time,” Caleb said.

Right before the state meet, however, Caleb broke his right foot. True to his character, Caleb still competed with a broken foot, but it prevented him from placing anywhere near the top of the pack.

His junior year, Caleb placed sixth in the state meet. He decided to swear into the Army over the summer as a delayed entry — he is moving to Fort Benning, Georgia, in June to begin basic training. Caleb said he wasn’t getting any college offers to play sports, so he decided to contribute to a different team after he finished high school.

This past fall during football season, Caleb suited up as an offensive lineman, but he started experiencing lingering pain.

“All through football season, my knees were killing me,” Caleb said.

At the start of track season, Caleb went to a doctor and received the diagnosis of severe tendinitis.

Six weeks later, he’s mentally preparing himself to win an event he’s been training for all throughout high school.

“He thinks he can win it,” said Dallas County head track coach Cliff Nix. “He said he still doesn’t think he’s thrown his best throw yet.”

Caleb will likely need to eclipse his best throw to earn a gold medal at Gulf Shores. Currently the Dallas County record holder at 122 feet, Caleb qualified for the state meet with a throw of 116 feet, 10 inches. The top competitor in Caleb’s flight, Tristan Hawkins from St. Clair County High School, qualified with a throw of 150 feet, 9 inches.

The odds may be stacked against Caleb on Friday, but Caleb isn’t worried about the odds. He’s going to do everything he can to win, and there isn’t much that will detract him from that goal.

“A lot of the time, the only person to push you is you,” Caleb said.

“And if you get up one day and you don’t feel like getting in the circle, [too bad]. If you want to be good, you’ve got to get in the circle.”