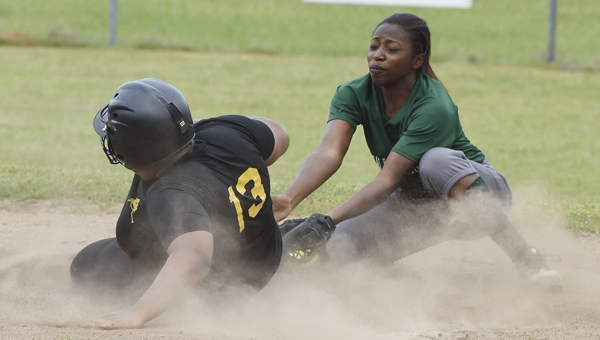 PLANTERSVILLE — Before Wednesday’s game against Ellwood Christian, Dallas County seniors Tori Hatfield and Alexis Walker continued a tradition by spray-painting their numbers onto the field.  Hatfield’s No. 4 was written in chalk behind the pitcher’s circle and Walker’s No. 21 was spray painted into the outfield.

It seemed fitting after careers that saw both leave it all on the field.

The seniors led the way for Dallas County in two blowout wins over Ellwood Christian Wednesday. The Hornets won the first game 15-0 in two innings and the second contest 17-4 in three innings.  Hatfield, who signed with Judson College in March, was the starting pitcher and won both games. She’s second all-time in school history in strikeouts and career wins and added to both totals Wednesday.

“Everything we did today was to honor our seniors,” Moore said. “We wanted to show them that we love and respect what they’ve done for the program.”

The Eagles were playing with heavy hearts after the loss of senior Denetria Pryor, who head coach Calvin Marshall said passed away on Wednesday morning. Pryor didn’t play softball this year, but Marshall said she had planned to before a knee injury sidelined her. Many of Ellwood Christian’s seniors missed the game to mourn the passing of their classmate. Those who did play were thinking of Pryor and her family.

“We did come and support their senior day and we were glad to be here,” Marshall said. “[After the game], they prayed for the young lady and her family and I told them I appreciate that.”

Moore said given the circumstances, he appreciated that Ellwood kept the game as planned.

“They lost a student, which is tragic. Their girls’ minds weren’t on softball today,” Moore said.

“I respect Ellwood for coming down here and not putting us in a bind, knowing that we had senior day festivities planned with parents taking off work. I respect them for that.”

Hatfield pitched both games for the Hornets and didn’t allow a run until late in the second contest. Even then, the runs scored were the result of walks after a rule change sped the game up and only allowed each batter two pitches.

In game one, Dallas County’s Yasmeen Green had a gigantic first inning. She hit a RBI double in her first at-bat, but followed it with an inside the park home run down the right field line. Jaliah Blakes hit a bases clearing triple to score Morgan Krumnow, Walker and Hatfield to give the Hornets a 15-0 lead.

Blakes then jumped off base early, which resulted in a third out and ended the inning.

The majority of Dallas County’s hits in the inning came on bunts, which were laid down perfectly to put the ball in play.

Hatfield struck out three of the six batters she faced in game one.

The Hornets chipped in seven more runs in the second inning before Ellwood got on the board in the bottom of the inning. Jiya Colvin bunted to bring in Kierra Stokes to make the score 17-1 Dallas County.

A poor pickoff throw to second base trickled into the outfield and allowed Diamond Webster and Colvin to score to pull the Eagles within 17-3.

Monique Jones added a final run for Ellwood before the game ended when Makayla Berry stepped off first base early.

Dallas County is scheduled to play Verbena on Thursday in Plantersville. Ellwood Christian’s next game is against Georgiana the class 1A, area 4 tournament in Uriah Tuesday.