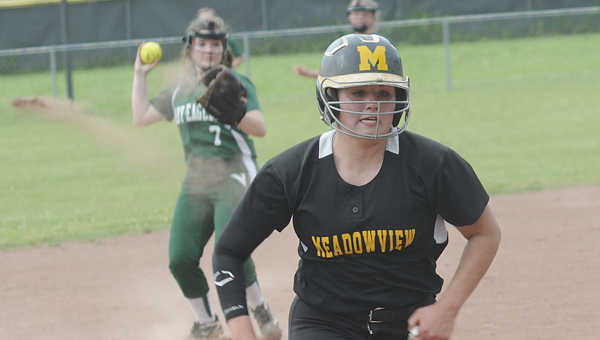 The Meadowview Christian Trojans softball team was rounding the bases, converting an unassisted triple play and singing a chorus of country songs in the infield Tuesday afternoon.

The Trojans looked like they were having fun, and the score showed it. Meadowview beat the Victory Millbrook Eagles 12-1 in six innings at home. Victory scored the first run of the game, and Meadowview took care of the rest.

“They clicked pretty well today. They gelled. They were relaxed and they had fun. That’s part of it, having fun,” said Meadowview assistant head coach Roy Freine.

In the top of the first inning, an error throwing to first base brought a Victory runner home to give the Eagles a 1-0 lead. Mallory Freine tied the game with a ground ball up the middle to send Emily Skelton home.

Christina Dabit also had a RBI in the second inning, as her ground ball went past the shortstop and brought Freine home.

The Trojans took a 4-1 lead into the fourth inning, where they managed to double their score.

Kalee Jones opened the inning with a double to deep right field. She later scored after a pair of Victory errors gave Jones an easy path home. Dabit drove in Mallory once again to extend the lead to 6-1.

With the bases loaded, Tayler Roberts drew a walk to bring Dabit home.

With two outs, Kameren Burton hit a single to third base to score Maggie Tipton. At the end of the fourth inning, Meadowview led 8-1.

After a scoreless fifth inning, Victory was back up to bat needing some runs to make it close.

In one play, Mallory thwarted those efforts. She caught a line drive at shortstop, tagged out the runner in front of her and threw to first for the unassisted triple play.

Roy, her father, said it was the first unassisted triple play he’s seen in a high school softball game.

“She was in the right spot at the right time and made a good play,” Roy said.

In the bottom of the sixth inning, the Eagles’ errors started to pile up. A single turned into a double for Shelby Boswell, and she scored on an Alyssa Verhoff RBI single. Burton followed a few batters later with an RBI that scored Roberts to make it 10-1.

Meadowview only needed one more run to win by mercy rule in the bottom of the sixth inning, but Jones decided she wanted two. With the help of a bevy of Victory errors, Jones rounded the bases to bring herself and Burton home to end the game.

“They played as a team as good as I’ve seen all year. They were cheering each other on and being there for each other,” Roy said.

Meadowview hosts Victory Mississippi Monday for the final game of its season.