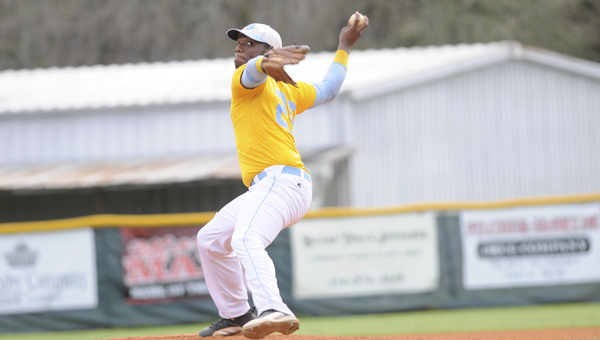 The Ellwood Christian Eagles gave the Selma Saints all they could handle for five innings, but Selma was able to pull away in the final two innings to make a close game look like a blowout.

Bonner said the bottom of his lineup helped out, as well as a bevy of Ellwood errors. The errors from both teams allowed multiple runners to score from Selma and Ellwood throughout the game.

After Selma starting pitcher Kiwansis Jones finished the first inning in three batters, Selma grabbed a 1-0 lead when a wild pitch allowed Ron Sanders to stroll home. Jones struck out two more batters in the top of the second inning, as Ellwood stayed scoreless through two innings. Eagles pitcher A.D. Tate kept the Saints from increasing their lead in the bottom of the second inning, and Ellwood got on the board in the third inning.

With two outs, Jaylen Colvin singled down the left field line. Colvin and Anietie Asubop both scored shortly after off of errant pitches from Jones to put Ellwood in front 2-1. Selma answered in the bottom of the third inning, as Jekobi Lee’s line drive to shallow left field sent Marquell Moorer and Jones home.

Jeremy Perkins tied the game for Ellwood 3-3 in the top of the fourth inning when he made it to home plate off another off-target pitch.

In the bottom of the fourth inning, Dione Allen scored the same way to give Selma a 4-3 lead. Jones hit back-to-back pitchers, sending Asubop to home plate to tie the game once again. Sanders filled in for Jones in relief, but it didn’t help right away. Rayford Mitchell singled and put the Eagles ahead 5-4 as Larry McGary crossed home plate.

“A 1A school competing with a 6A school like that is tremendous,” said Ellwood head coach Gary Crum. “We hung in there for five innings.”

The game got out of hand for Ellwood in the bottom of the fifth inning. Moorer drove home DeAndrae Alexander with a single up the middle to tie the game 5-5. Lee followed with an RBI to send Moorer home and Brandon Moore followed with another RBI.

Selma led 7-5 at the end of the fifth inning. The Saints added five runs in the sixth inning, sparked by a Sanders triple that brought Tevin Craig and Kendrick Powell home.