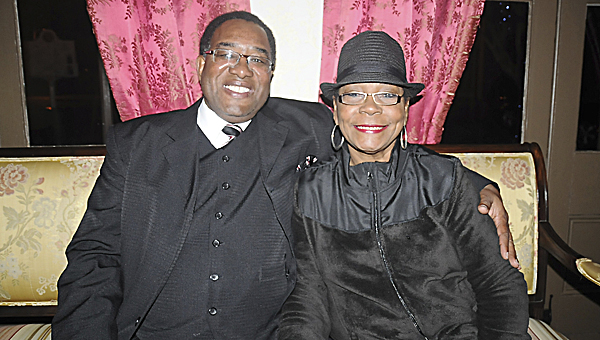 Curtis Williams sits with his wife Jerolene Williams at the St. James Hotel shortly after he found out he had won the election for Dallas County’s District 3 commissioner. –Justin Fedich

Larry Nickles compared his experience during the Dallas County Commission election to the storm that passed through Tuesday night.

Heavy wind and rain blew through in the evening, but once the skies cleared later in the night, so too did Nickles’ hopes of returning to office.

The incumbents led the way in the Tuesday’s Dallas County Commission elections.

The District 1 race will go to a run-off between Towns and Valerie Reubin since none of the three candidates earned 50 percent or more of the vote.

Despite an impending run-off, Towns was in good spirits Tuesday night. He said he is still confident he will still win the election.

“I figured it might have been a run-off with three of us in the election,” Towns said.

Reubin didn’t finish with the majority of the District 1 vote, but she was still excited with the result. She stood up and high-fived her supporters when the vote totals were announced.

“I feel like we could’ve done a little bit more, but we still have got a chance in this run-off,” Reubin said. “This gives me a lot of motivation.”

The runoff election will be Tuesday, April 12.

Nickles barely avoided a runoff, as he earned 50.65 percent of the vote in the three-person race for District 4 Commissioner. John Lumpkin received 35.46 percent of the vote with 1,197 votes and Raymond Butler earned 469 votes, which resulted in 13.89 percent.

Nickles said it was a nervous night for him, but he was happy with the result.

“I feel like I’ve been led by God for this position, and I’m thankful for all the people that worked tirelessly out there for us, who campaigned for us,” Nickles said.

While Williams’ race for District 3 Commissioner wasn’t as much of a nail-biter as the District 4 race, he still was elated when he found out that he had officially won.

“I’m happy, I’m joyful and I just thank the Lord for giving me this opportunity to serve my constituents of District 3 for the Dallas County Commission,” Williams said.

Williams also thanked his wife, all of his children and his campaign workers for the job they did in helping him throughout the campaigning process.

“I just want to applaud them and let them know that I appreciate them from the depths of my heart,” Williams said.

While the work continues for the District 1 candidates, the campaigning is over for Williams and Nickles.

Nickles said he was joyful, tearful and ready to get some sleep after working 20-hour days nonstop for the past six to eight weeks.

“I’m going to sleep better tonight than I have in the last six months,” Nickles said.