Keith falls to Sacred Heart in thrilling 1A semifinal 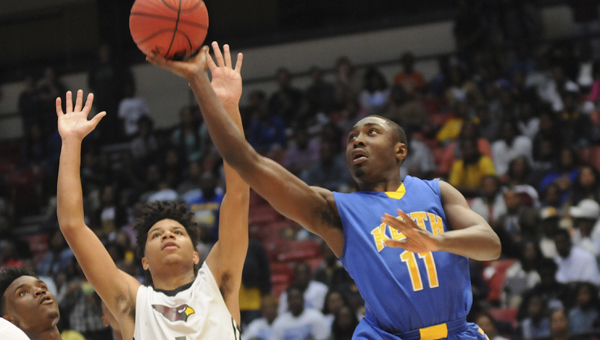 BIRMINGHAM — With just under three minutes to play, Keith (26-7) and Sacred Heart (28-8) were tied in a thrilling 1A boys state semifinal Monday in Birmingham.

Kevion Nolan and DJ Heath led the defending champion Cardinals on an 11-0 run and Sacred Heart escaped with a 75-67 victory. The Bears were left wondering might’ve been had one or two plays gone differently down the stretch.

One of those plays came on a loose ball near the Keith bench in the final minutes. Sacred Heart dove on the floor, won possession and used it to take the lead for good on free throws by Heath.

That’s how close the game was throughout the second half.

The Bears trailed most of the way, but John Pettway went on his own 8-0 in the fourth quarter to help Keith take a 62-57 lead. Sacred Heart answered with a 3-pointer and two free throws by Nolan to tie the game.

Morris Collins knocked down a layup to give the Bears a two-point edge with 3:16 left, but Nolan again knocked in two free throws to tie the game. Heath made two free throws and a steal by Murdock Simmons III led to an easy fastbreak layup to put the Cardinals up 68-64.

From there, Sacred Heart, which made 29 of its 37 free throw attempts, iced it away at the free throw line. Pettway, a South Alabama commit, missed his final five shots in trying to lead the Bears back. He finished the game with 34 points to lead all scorers and also had 10 rebounds and six assists.

“I think he’s the best guard in the state,” Tisdale said. “That’s no disrespect to any other guard … but if he’s not the best, he’s one of the best.”

Pettway definitely made his own case with his play. He finished the game 13-for-25 from the field and 7-for-10 from the free throw line.

Sacred Heart led by as much as nine in the early minutes, but Keith responded with its own 7-1 run. Justyn Pettway and Morris Collins knocked in shots to pull the Bears within 18-15 after the first period.

In the second quarter, Heath made two early shots and helped the Cardinals take a six-point advantage. Keith again answered with a big run. Jimmie Powell keyed it with a dunk that broke something off the goal and had officials looking up to see what it was. Whatever broke was repaired at halftime.

After Powell’s dunk, John Pettway made two short shots inside to pull the Bears within 35-34 at halftime.

Sacred Heart outscored the Bears 40-33 in the second half.

Powell had 12 points and six rebounds for the Bears. Heath led Sacred Heart with 23 points, Nolan had 20 and Diante Wood scored 17 points and added 12 rebounds.

Sacred Heart will move on to play Georgiana for the 1A state championship Thursday.

Keith’s Harriet Winchester was double teamed throughout Monday’s 50-34 loss to Spring Garden in the 1A girls state semifinal in... read more