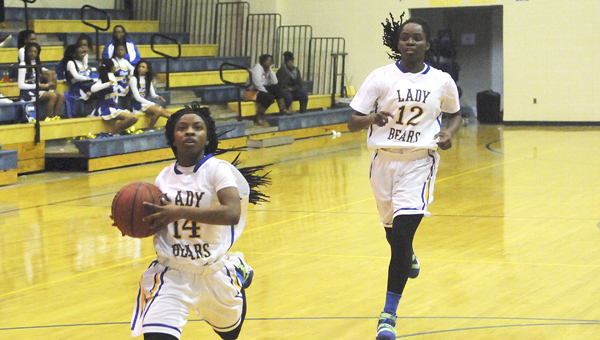 Keith’s Ambdreya Snow races up the floor for a layup attempt while Harriet Winchester looks on from behind. Snow and the Bears forced 27 turnovers and blew out Billingsley 69-21 to move on to the Central Regional in Montgomery on Thursday. –Daniel Evans

ORRVILLE — Four minutes before Keith and Billingsley tipped off their sub-regional playoff game Monday night, the lights in the Orrville gymnasium went dark.

It might’ve been a prelude of things to come for both teams.

Once the lights came back on, Keith (28-2) put on an offensive show. The Bears made 50 percent of their shots in the first half, with most of them coming off of steals, and blew out Billingsley 69-21 to advance to the Central Regional for the fourth straight year.

“We played [defense] real well, a lot of turnovers,” said Keith head coach Cecil Williams. “We took advantage and that pushed us on through.”

The second half was not competitive as Keith seniors Harriet Winchester, Zykia Pettway and Quomila Johnigan played out their final minutes on Keith’s home floor. Pettway, who isn’t usually known for her shooting ability, capped the game off with two 3-pointers in the final minutes.

“It was a bittersweet moment,” Pettway said. “I’m happy we won, but I hate that it’s our last [home] game.”

The biggest drama from the night actually came before the game tipped off. As both teams were finishing warmups, the lights went out and caused a delay that lasted over an hour. Officials told school administrators that only 90 minutes could be provided for the lights to get back on, meaning it was a race against the clock.

Many stayed seated in the gymnasium during the power outage, while other walked outside. Williams said he trusted his players to conserve their energy during the outage.

Winchester said she and others made shadow puppets on the wall to pass the time.

“I took a nap myself,” Winchester said. “Other than that I was making little animals in the shadows.”

After an hour, administrators from both sides discussed a backup plan if the game couldn’t be restarted in the allotted 90 minutes. The plan was for the game to be at 1 p.m. Tuesday, six hours before the Keith boys game against Maplesville, so that the gate for each game could be correctly split between the schools.

It would’ve meant a second day of travel for Billingsley, who is out of school on Tuesday due to an in-service day.

Instead, that plan never had to come into action.

Once the game started, Keith got off to a quick start. The Bears led 20-6 after the first quarter and led by 36 at halftime.

Keith made 19-of-38 field goal attempts in the first half, including 3-of-5 3-pointers, to set a blistering pace. Keith’s defense led to early offense as the Bears forced 27 turnovers.

Nine Keith players scored in all, including Shatavia Moore with 12 points and Pettway with nine points.

The Bears will play Notasulga Thursday at 3 p.m. at Alabama State University.

BESSEMER — For the eleventh time in 13 years, the Selma Saints are heading to the regional round of the... read more