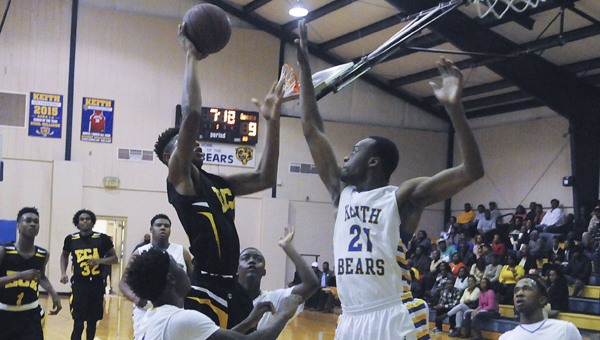 Ellwood Christian’s Christopher Lee tries to shoot the ball over the outstretched arms of Keith’s Dalven Johnson during Wednesday night’s class 1A, area 5 championship game in Orrville. The Bears won the game 71-49 and will host Maplesville during the sub-regional portion of the AHSAA playoffs. — Daniel Evans

Keith senior John Pettway picked up two fouls in the first five minutes of the game, meaning the guy responsible for the majority of Keith’s scoring had to sit out the final 13 minutes of the half. Walker knew the first half was Ellwood’s chance to get ahead in its upset bid to win the area title.

Keith’s Dontavius Thomas made sure that didn’t happen. Thomas scored 22 points, with 16 of those coming in the first half while Pettway sat on the bench, and Keith coasted to a 71-49 victory.

“[Dontavious] got in some passing lanes, got some deflections, got some easy looks and made a couple of shots here or there,” said Keith head coach Tommy Tisdale. “We did a lot of things as a unit.”

The Bears managed to lead throughout, despite their leading scorer being on the bench. Pettway, a South Alabama commit, picked up his second foul with 2:25 left in the first quarter, and ended the game with only 11 points.

“We got the No. 1 player in Dallas County on the bench,” Walker said. “It couldn’t have started any better. But then we turned the ball over and missed free throws and that’s a bad combination.”

With Pettway off the floor, Thomas picked up the slack, scoring 10 points in the first quarter to give Keith a 17-7 advantage.

The Bears lead grew as big as 31-13 before Ellwood closed the gap back down to 17 points. Thomas made a floater before halftime to allow Keith to take back a 42-23 lead.

Ellwood began the second half on a 12-3 run to shrink Keith’s advantage to ten. Ellwood’s Christopher Lee made one of his two 3-pointers to close that run, which pulled the Eagles within striking distance.

Keith answered with a 13-1 run of its own, led by Thomas, Justyn Pettway and John Pettway, who became a factor in the third quarter. Justyn raced the floor for back to back layups and Thomas chipped in a final shot before the end of the quarter to put Keith ahead 58-36.

John scored nine of his points in the second half to help Keith maintain a lead.

“If there was such a thing as a moral victory, I would say we won,” Walker said.

Rayford Mitchell, who played man defense on John most of the night, led Ellwood with 16 points in the game.

Keith will host Maplesville Tuesday night at 7 p.m. in Orrville in the sub-regional round of the playoffs. Ellwood will play at Autaugaville.

If both Keith and Ellwood win two more games, they’d meet in the central regional final in Montgomery for a spot in the class 1A semifinals.

ORRVILLE — For the first four minutes of Wednesday night’s class 1A, area 5 championship game, Isabella had gotten the better of defending state champion Keith. The Mustangs were keeping the Bears’ offense in check, finding good shots and keeping a game close many thought would be a blowout.

The next four minutes didn’t go as well for the Mustangs, and neither did the final 24. Behind a balanced scoring attack where eight players scored, Keith outlasted Isabella 54-21 to pull away and win its fifth straight area title.

“We kind of started slow, but we picked it up and got in game mode,” said Keith head coach Cecil Williams.

Harriet Winchester knocked down a deep 3-pointer and connected with Shatavia Moore on two backdoor assists to help the Bears take a 13-7 lead. Ambreya Snow stole the ball and somehow contorted her body to make a layup through contact. Snow tacked on a free throw to complete a 3-point play to put Keith ahead 16-7 after the first quarter.

In the second period, Keith’s size started taking its toll. Zykia Pettway kept fighting inside and had multiple possessions where she had more than one offensive rebound to keep the ball alive.

Winchester drove to the basket and made a layup despite being foiled with 5:05 left in the second quarter to put Keith up 21-9. She made another layup minutes later to make it 25-9. The Mustangs trimmed the lead to 26-14 before halftime with two scores in the final minute of the half, but Keith pulled away in the third quarter.

The Bears held the Mustangs to just five third quarter points and only seven total points in the second half.

“That’s the main thing we focus on — defense. Offense is going to come,” Williams said.

“Being able to stop somebody takes a whole team effort.”

Winchester attacked the rim for a layup to make it 31-17. Snow and Moore added layups in the next handful of possessions as the Bears eliminated any chance of an upset.

Moore, Winchester and Pettway all scored 11 points and Snow added in another seven.

Keith will host Billingsley Monday night in Orrville in the sub-regional round of the playoffs.