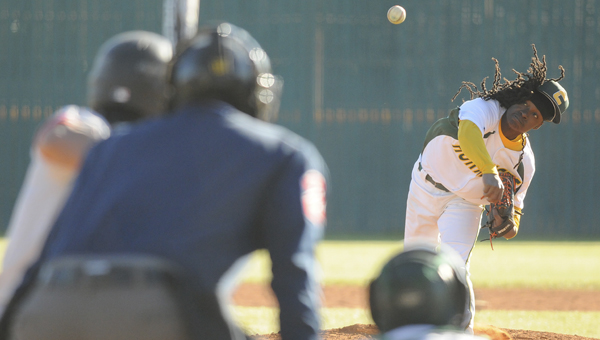 Concordia College Alabama’s Don Creecy throws a pitch during Tuesday’s game against Talladega College at Bloch Park. Creecy and the Hornets lost both games of their doubleheader against Talladega. The Hornets will play their next game Saturday against Morehouse College. — Daniel Evans

Concordia College Alabama pitcher Don Creecy was throwing a lot of strikes during Tuesday’s game against Talladega College, but the Hornets defense wasn’t doing him any favors.

Creecy threw 102 pitches in what turned into a 17-7 loss to Talladega on Tuesday in the second game of a doubleheader. Hornets head coach Curtis Wimberly said if his team had made routine plays, Creecy would’ve only had to throw around 75.

“For your teammates not to make the routine plays that should be made, it’s very frustrating for a pitcher,” Wimberly said. “It’s the extra pitches that add up. When they make a mistake behind him, he feels like he has to be a little more perfect to get the strikeout.”

The teams played Tuesday in 40-degree temperatures, but the wind, which gusted at times, didn’t make conditions any more fun for the players. The cold didn’t seem to affect the Tornadoes, who won the first game 15-3 and pulled away to win the second game.

In game two, Talladega scored one run in both the first and second inning to take command quickly. The Hornets answered back with three runs of their own in the bottom of the second inning.

Concordia’s Ja’Davin Kieth singled to score Darious Ford to pull the Hornets within 2-1 in the second inning. A throwing error allowed Carl Fleeting Jr. to tie the game. Nyles Freeman then grounded out, but Kieth scored to give Concordia a 3-2 lead.

An error and two walks by Creecy helped Talladega load the bases. Talladega’s Gabriel Matias knocked the ball toward first base, where Concordia’s Derrick Johnson had it go off his glove. Talladega tied the game on the play and retook the lead when a walk scored Luis Alvarado.

Emmanuel Lopez singled to add to the Talladega lead, giving the Tornadoes a 5-3 advantage. Talladega tacked on one more and then added another two runs in the fourth inning.

“What we’re failing to do is make the routine play behind [our pitchers],” Wimberly said. “There’s three seniors and everybody is freshmen and sophomores. Those are mistakes we work on in practice We shouldn’t make those mistakes.”

Concordia’s best offensive inning of the game came in the bottom of the fifth. Jhalandius Sullivan singled to score Carl Fleeting Jr. to pull the Hornets within 9-4. Derrick Johnson was hit by a pitch, scoring Kieth. Two more walks — drawn by Zakir Jordan and Darius Ford — scored Sullivan and Mason Miller to pull Concordia within 9-7.

A double by Matias helped give Talladega an 11-7 lead in the top of the fifth. Another double later in the inning by Anthony Rodriguez brought in two more runs to help the Tornadoes take a 16-7 lead.

Concordia couldn’t muster anything in the bottom of the seventh, with Jamel Stewart grounding out to end the game.

“We will get at it tomorrow at practice and we will get better,” Wimberly said.

Concordia will play at Morehouse College on Saturday.

Meadowview Christian’s Justin McGuire races toward the basket for a fastbreak layup in a game against Marion Academy Tuesday. McGuire... read more