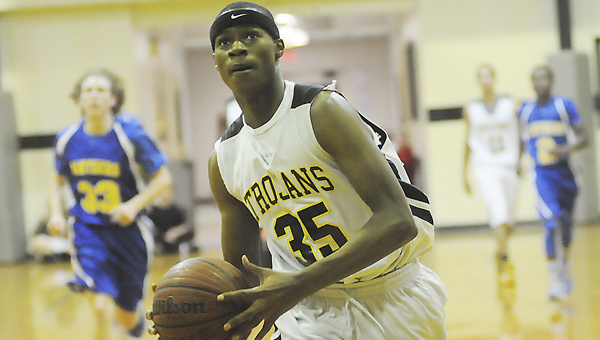 Meadowview Christian’s Justin McGuire races toward the basket for a fastbreak layup in a game against Marion Academy Tuesday. McGuire led all scorers with 29 points in a 71-56 win. — Justin Fedich

Meadowview Christian was in control of the game for the first three quarters but led by only two points with 1:44 remaining. Justin McGuire stepped up late, scoring 13 fourth-quarter points to give the Trojans a 15-point victory.

The Meadowview Christian Trojans (16-8) ended their regular season with a 71-56 win over the Marion Academy Panthers Tuesday at Meadowview. Justin led the Trojans with 29 points and Jevar McGuire added 20 points.

Kaymon McGuire made a 3-pointer with 3:07 left in the first quarter, to give Meadowview a 7-4 lead. After falling behind 8-7, Jevar stole an inbound pass and made a layup to put the Trojans back in front.

The Trojans led 10-8 at the end of the first quarter. Justin equaled Meadowview’s first-quarter scoring total in the second quarter alone. Justin scored five two-point shots in the second period, including a fastbreak layup with 4:20 on the clock to give the Trojans a 21-14 lead.

“Justin is a difference maker, and when he’s hustling and he’s able to go full speed, we all can see the difference,” said Meadowview head coach John Robert Morton.

With 3:49 remaining in the first half, Justin pulled down a pair of offensive rebounds and made a layup to give Meadowview a commanding 26-14 advantage.

Midway through the fourth quarter, the Panthers had pulled within five points of the lead, but Sam Dabit stole an inbound pass and converted on a 3-point play to give Meadowview a 49-42 lead with 3:59 left. Jevar made a layup with 2:32 remaining to put the Trojans ahead 57-51, but he was ejected from the game shortly after for a brief altercation with an opposing player.

Leading 57-55 and down one of their best players, the Trojans took the game into their own hands by ending the game on a 14-1 run. Justin was a huge part of the run, as he contributed points from the 3-point line, the free throw line and then added a dunk with 27 seconds left to officially put the game away.

Meadowview has two weeks off before facing the winner of a playoff tiebreaker between Providence and Clay County Christian in Oxford on Thursday, Feb. 18 at 4:30 p.m.

Tayler Roberts scored 13 points for the Meadowview Christian Trojans in a 58-26 win over the Marion Academy Panthers Tuesday at Meadowview. The Trojans finished their regular season with a convincing win to give them momentum going into a playoff matchup against unbeaten Victory Baptist Thursday.

Meadowview was able to give multiple bench players plenty of playing time to keep the starters fresh for the first round of the playoffs.

“It gives us a chance to rest them for Thursday night,” said Meadowview coach Scott Gunter.

The Trojans came out firing offensively from the start Tuesday. In the first quarter, Roberts had seven points, Mallory Freine scored six points and Hannah Thornton tallied five points to take a 24-3 lead at the end of the first period.

Nikita Miller and Christina Dabit each added a pair of field goals in the second quarter, and the Trojans led 36-7 at halftime.

The Meadowview defense limited the Panthers to two points in the fourth quarter to finish the blowout.

Gunter knows the Trojans will face a much tougher challenge in their next game Thursday. The Trojans travel to Mississippi to face Victory Baptist, who has already found success against Meadowview this season.

“We played them one time,” Gunter said. “They beat us by seven here. They’re undefeated, so let’s hope for the best.”